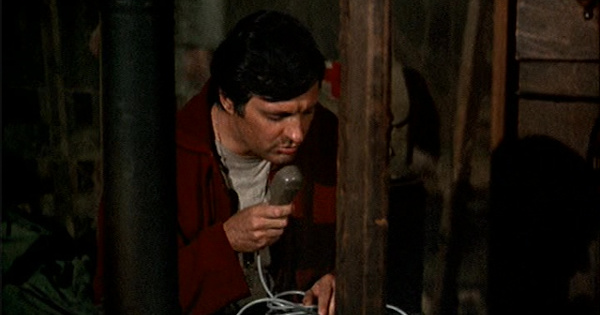 Capsule Summary: Hawkeye dictates a letter to his father via tape recorder, telling him about the previous day’s craziness at the 4077th.

This is a “letter home” episode with a twist: rather than write a letter to his father, Hawkeye uses a tape recorder to make an audio recording to send home to his father. Is this the only time we see anyone other than Charles using a tape recorder? And can anyone identify the tape recorder seen in the episode? It has to be a reel-to-reel recorder and it could be an early Ampex model. Note the long cord and the huge microphone.

Of the three stories making up the “full rich day” experienced by the 4077th, I think the Luxembourg story is the most amusing, due to its heavy emphasis on Henry and his always hilarious comments. Even though it makes no sense whatsoever that LeClerc would have gone missing. He was in post op. He had a chart. He must have had dog tags. And if he was really unidentified, are we supposed to believe that Hawkeye would not mention it to his father? That particular plot point requires some willing suspension of disbelief. But the scene with the Luxembourg national anthem and LeClerc struggling out of bed to stand proudly at attention is worth it.

Also requiring some disbelief is Lt. Smith’s plot line. But it isn’t so easy to ignore how him pointing his gun at every doctor he meets is completely unbelievable. Where were the MPs? Nobody thought to call for them? He was allowed to rove the hospital, dirty and grimy and potentially infecting patients, and even given a mask? Not to mention the fact that had someone driven into the compound with a wounded soldier, there would be nurses or corpsman or doctors swarming to help immediately. He wouldn’t have been ignored.

Finally, there’s the crazed Turkish soldier. The best part was Hawkeye and the Turk both slamming meat cleavers into the cutting board and Radar’s reaction to that. And of course the Turk driving back to the 4077th to drop off the unconscious Radar and then escaping in his stolen Jeep. But this, too, requires the viewer to accept that MPs would not be around to monitor an unruly patient or to help track him down.