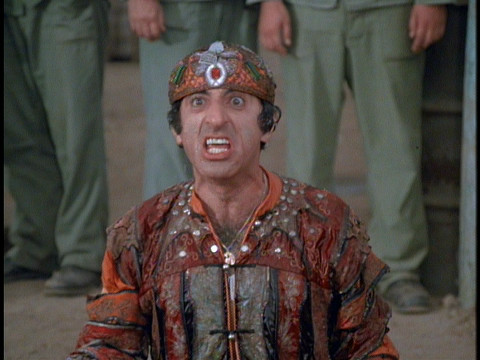 Capsule Summary: Radar attempts to improve himself by enrolling in a creative writing correspondence course. Meanwhile, Hawkeye and B.J. attempt to cheer up Frank on his birthday by pretending to fight.

What makes this episode so remarkable is that on the surface neither the A or B stories should work. But they both do. Just think about the A story involving Radar’s correspondence course. You basically have a character who spends the entire episode butchering the English language. Yet just when you’re saying “This is painful, please make it stop” you realize that’s the point. Radar wouldn’t be Radar if he didn’t think being a writer just meant using big words whenever possible and often incorrectly.

As for the B story in which Hawkeye and B.J. decide to fake a fight only to get into a real fight, that’s straight out of sitcom cliche 101. But mostly on the strength of Mike Farrell’s ability to act acting angry, it also manages to work out. Frank’s pure joy at seeing his Swampmates nearly come to blows and his anger at Radar for ruining his birthday by getting them to patch things up certainly helps, too.

“Who put gasoline in my gasoline?!”

Klinger’s fake attempt at self-immolation and Potter having his can of water filled with actual gasoline is hilarious. But if you stop and think about it, he only resorted to such a drastic piece of trickery after trying to capture Chinese prisoners and failing, in the process being assaulted by soldiers who mistake him for a woman. That’s actually pretty dark. It’s played for laughs and Klinger doesn’t appear to be any the worse for wear aside from torn clothing and a busted rifle. It’s not quite as funny without the laugh track, though.

The Amazing Radaro, the world’s first magician/clerk/typist, is the only part of this episode that doesn’t quite work. It actually feels a little out of place, as if it was tacked on at the last minute. I’m sure were supposed to assume he’s now enrolled in a correspondence course to learn magic but something about the scene is off.

If you look closely, after a gasoline-drenched Klinger runs into the showers, the woman who runs out clad only in a towel is very obviously laughing. One has to wonder how many takes it took to film that scene and how long the unnamed extra had to wait in the showers for her cue. Furthermore, if you look at the inside of the tent when she runs out, it doesn’t look like there are actually any showers inside.

9 Replies to “Episode Spotlight: The Most Unforgettable Characters”