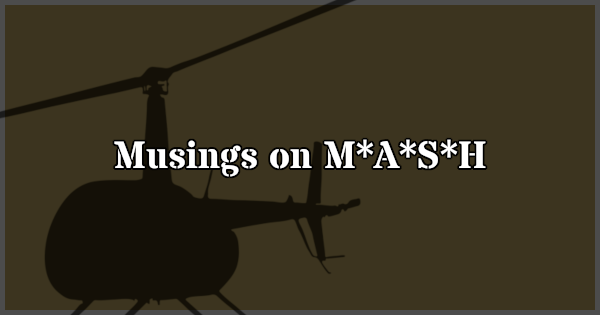 Despite having owned the Season One set since 2002 and the Martinis and Medicine Collection since 2006, until last weekend I hadn’t watched any episodes of M*A*S*H without the laugh track. I don’t recall the ability to watch episodes of the series without the laugh track being used as a selling point back in 2002 (not that M*A*S*H needed any help selling itself on DVD) but it was something of a bonus feature for an otherwise bare bones release.

Personally, I’ve never found the laugh track on M*A*S*H to be obnoxious or overwhelming. But after sitting down to a mini marathon of six episodes — “Requiem For A Lightweight,” “The Army-Navy Game,” “There Is Nothing Like A Nurse,” “The Late Captain Pierce,” “Death Takes A Holiday,” and “Sons and Bowlers” — I realized that the laugh track does occasionally overpower dialogue. I can’t think of any examples where the laugh track intruded upon an actual conversation or ruined a joke but there were certainly times where laughter covered up the reaction to a joke.