This is an example of how cuts made to episodes in syndication can lead to confusion. I used to keep a list of M*A*S*H goofs with dozens of submissions from fans. One such goof came from the Season Eight episodes “Dreams,” originally broadcast February 18th, 1980. Many years back Sean sent me the following:

Robert later sent in this correction:

Brent then sent in a correction to the correction:

If you watch that episode on DVD there is a cut scene that shows Klinger taking off his earrings and putting them into a hat BUT later on after that it shows him again with his earrings ON.

So, a goof that wasn’t quite a goof turned out, in the end, to be a goof? Whew. That’s confusing. Here’s what happens: Charles walks into the O.R. and everyone begins to gather around to watch his show, Klinger included. He actually isn’t wearing any earrings at this point. 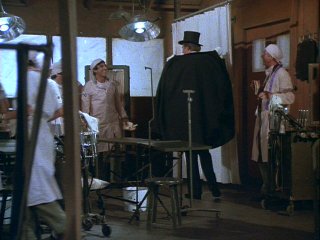 Cut to a shot of Charles against one of the white privacy dividers. In the next shot, which shows everyone clumped together, Klinger is now wearing large diamond earrings. 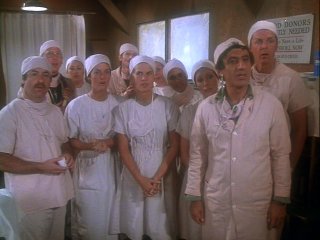 Charles does a few tricks, everyone applauds and Klinger passes around Charles’s top hat, placing his earrings (we actually only see him put in one) inside. 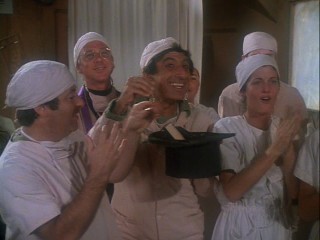 The dream then takes a turn for the somber: everyone stands aside to reveal Colonel Potter and a patient is wheeled in on a gurney. Charles does another trick and everyone applauds. Klinger is once again wearing the earrings. 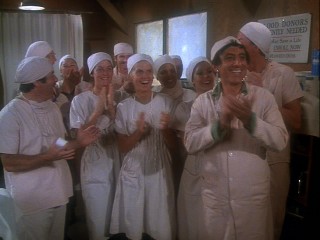 Everyone stops applauding when the patient goes into distress. Charles keeps the act going but no amount of magic can save the dying patient. In several close-up shots, Klinger is seen without his earrings. 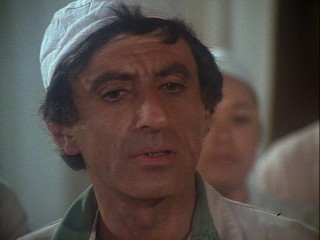 The patient eventually dies and, as Charles dances with a pair of sparklers, is wheeled back out on his gurney. Charles wakes up and utters a single word: “Damn.”

So what does this tell us about M*A*S*H? Surprisingly little. The reaction shots with everyone applauding and smiling were simply filmed at the same time. Thus, Klinger always has his earrings on in those shots. What this does indicate is the closeness with which some fans view the series. To notice a goof in an episode, even one created due to a cut scene, is one thing. To realize while watching the uncut episode that the goof in question wasn’t actually a goof is something else entirely. But to then figure out that there is in fact a goof? That takes the cake.

One Reply to ““Dreams” Goof”