This goof is from “Movie Tonight,” originally broadcast February 22nd, 1974. When the projector breaks down for what seems like the millionth time, Margaret gets up and sings “C’est Magnifique.” She keeps singing even after Klinger fixes the projector. The movie, however, is seen only on the screen behind her, which also shows her shadow. It should have projected over her. 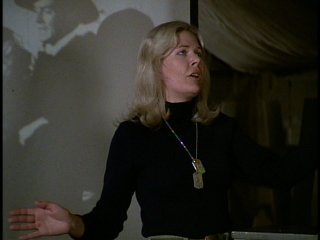 Thanks to William for this goof.