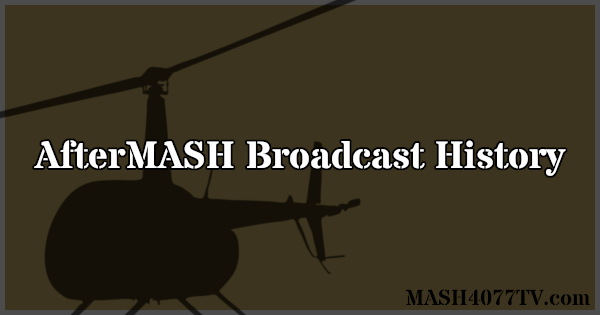 AfterMASH premiered on Monday, September 26th, 1983 at 8:00PM with an hour-long episode (split in two for summer repeats). The following week, it moved to 9:00PM. The first season finale was broadcast on Monday, March 12th, 1984 and the series was replaced with Kate & Allie for several weeks. Summer repeats began on Sunday, April 29th, 1984, airing at 8:00PM. These repeats were shifted to Tuesdays beginning June 24th. The final summer repeat aired on September 11th, 1984; the following week AfterMASH was pre-empted by the premiere of E/R.

The first episode of the second season was given a special showing on Sunday, September 23rd, 1984 at 8:00PM before the Emmy Awards. The following week, the series moved to Tuesdays at 8:00PM. Only five episodes aired in this timeslot (and one pre-emption) before the series was cancelled. That’s where things get tricky.

On December 4th, CBS aired the 29th episode of the series, titled “Ward is Hell.” The following week, on December 11th, the episode “Saturday’s Heroes” was supposed to be aired but CBS pulled the broadcast at the last moment (after TV Guide and local television listings had been printed). There is reason to believe that CBS sent out press material promoting another new episode (the very last episode, in fact) of AfterMASH as airing on December 18th at 8:30PM. At least one source (The Hartford Courant) lists this episode (about a flood and a poker game). However, the final weeks of 1984 would be filled with animated specials, not AfterMASH.

Five months later, CBS announced it would air the final two episodes of AfterMASH back-to-back on Friday, May 31st, 1985. The second-to-last episode, “Saturday’s Heroes,” aired from 8:00PM to 8:30PM. And then, as one final slap in the face, CBS pulled the very last episode, “Wet Feet,” and aired a news special with Dan Rather. The final episode has never aired.