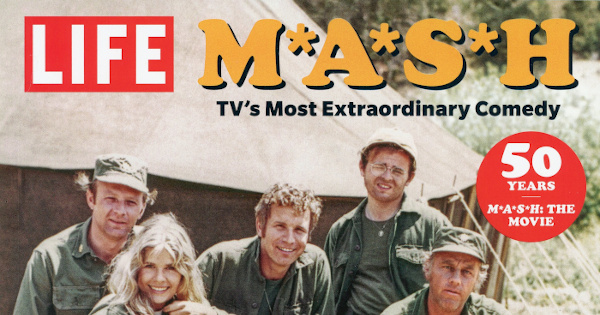 As you might expect, this special edition of LIFE magazine is full of photographs. LIFE was, after all, a magazine famous for its photos. In both color and black-and-white, the magazine tells the story of the MASH franchise: from the novel to the film to the television series and beyond. Many of the photographs are stills from various episodes of M*A*S*H but there are also a number of candid behind-the-scenes photos.

There’s plenty of text, as well, starting with a foreword by Steve Rushin in which he refers to both the series and the larger franchise as “an indelible fixture in American popular culture.”

The bulk of the magazine is split into five sections: From Page to Screen; M*A*S*H Lands on Television; Roll Call at the 4077th; Goodbye, Farewell and Amen; and Life Beyond the Finale. The first section traces the history of the novel and its big screen adaptation. The next section explores how the television series was born and brought to the small screen. It mostly covers the first three seasons with a few paragraphs devoted to Larry Gelbart’s departure after Season 4 followed by Gene Reynolds leaving after Season 5. “And with that, M*A*S*H entered its second act, managing to maintain its popularity and relevance while delving even deeper into social issues, largely on the strength of the characters who’d been so solidly established and so uncommonly beloved.”

Curiously, the magazine all but ignores the show’s second end. The third section contains brief biographies of the main characters with one notable exception. I’ve looked through this section multiple times and there is no biography of Hawkeye Pierce.

The fourth section is devoted to the end of M*A*S*H and the series finale. The fifth and final section, covering what the cast and crew did after the show ended, is the shortest. There’s a brief paragraph about AfterMASH and even two sentences about the unsold pilot “W*A*L*T*E*R” starring Gary Burghoff. The 2008 restoration of the outdoor M*A*S*H filming location at Malibu Creek State Park is mentioned. So, too, is a reunion of Alan Alda, Mike Farrell, and Loretta Swit on Alda’s “Clear+Vivid with Alan Alda” earlier this year.

Whoever wrote the text did a fine job. I didn’t notice any errors as I flipped through the pages. It’s a shame so much of the magazine is devoted to biographies of the characters rather than exploring more of the history of the show and its impact on popular culture. And I don’t know why the decision was made to focus almost exclusively on the first five seasons.

For M*A*S*H fanatics, there likely isn’t much new information in the pages of M*A*S*H: TV’s Most Extraordinary Comedy. But there are some great behind-the-scenes photos I’ve never seen before, including one of Alan Alda reading the script for “The Longjohn Flap” and another of Barbara Walters interviewing Alda on the set.

Support MASH4077TV.com by purchasing a copy from Amazon.com.

The magazine is also available as an eBook version for the Kindle. You can also buy it through Meredith Corporation’s magazine.store website.

One Reply to “Magazine Review – M*A*S*H: TV’s Most Extraordinary Comedy”