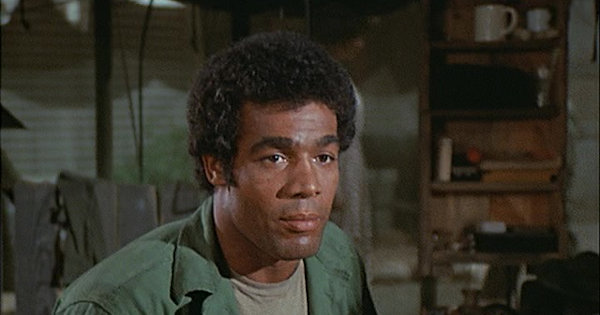 Athlete and actor Timothy Brown passed away Saturday (April 4th) at the age of 82. Brown spent eight seasons playing professional football with the Philadelphia Eagles and also played with the Green Bay Packers and the Baltimore Colts. In the late 1960s, he transitioned to acting. Brown had a small role in the 1969 movie MASH, playing Corporal Judson. When M*A*S*H became a TV series, Brown was cast as Captain Oliver Harmon “Spearchucker” Jones (played by Fred Williamson in the movie).

Spearchucker was one of several minor recurring characters written out of the series during the first seasons. Others include Ho-Jon and Ugly John. According to Larry Gelbart, “extensive research” led the producers and writers to believe there were no black surgeons assigned to MASH units during the Korean War. “We were not interested in empty tokenism,” Gelbart wrote in a July 1998 post to the alt.tv.mash newsgroup. “We also had to cut down on the number of characters in the series for budgetary reasons,” he added.

(As The Monster M*A*S*H Wiki explains, at least two black surgeons did serve in MASH units during the Korean War.)

After leaving M*A*S*H, Brown had guest roles in a handful of TV shows during the 1970s and 1980s. He also appeared in moves like Nashville, The Zebra Force, and Losin’ It. According to his Internet Movie Database profile, Brown had just three acting roles between 1990 and 2000, with his last credited role coming in the 2000 movie Frequency.

Yesterday, Loretta Swit tweeted the following in response to the news that Brown had died: