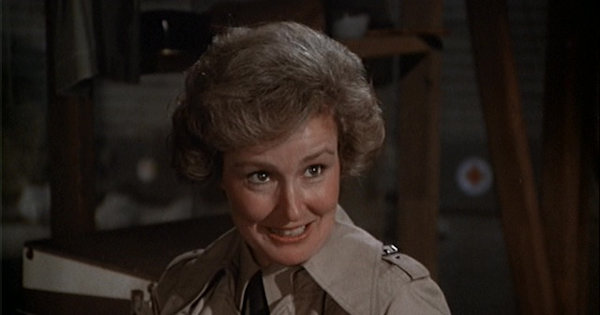 Actress Claudette Nevins, who played Donna Marie Parker in “Mr. and Mrs. Who?” during Season 8, died February 20th at the age of 82. In the episode, Charles returns from a raucous trip to Tokyo and learns he married someone while heavily intoxicated. When his wife–a Red Cross nurse–arrives, Charles is relieved to discover the wedding wasn’t legal. The camp later celebrates the un-wedding of Mr. and Mrs. Chuck “Cuddles” Winchester.

During her lengthy career, Nevins made guest appearances on dozens of TV shows, including The Defenders, Lou Grant, Barnaby Jones, One Day at a Time, L.A. Law, Picket Fences, and Without a Trace. She had recurring roles on Melrose Place and JAG. She also starred in the original Broadway production of Neil Simon’s Plaza Suite and a national tour of Howard Sackler’s The Great White Hope.

According to the Internet Movie Database, her final acting role was a 2005 episode of Strong Medicine.

Obituaries can be found at The Hollywood Reporter and Playbill.