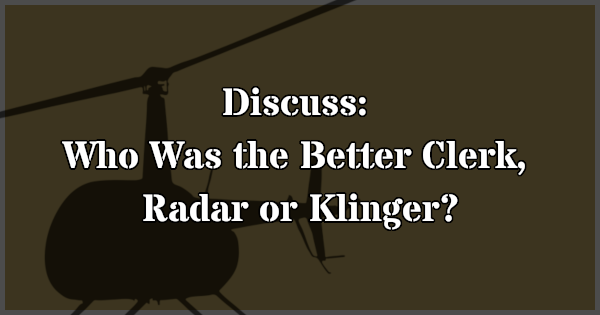 Today’s topic is: Who was the better company clerk, Radar or Klinger?

Forms Filled Out in Triplicate

The 4077th had two company clerks: Radar O’Reilly and Max Klinger. Was one of them better at the job than the other? I think many fans will immediately say Radar was the better company clerk, because he had the uncanny ability to know what his commanding officer wanted or needed before being asked. But Klinger performed his duties admirably, once he settled into the job. He had big shoes to fill, following Radar. It’s honestly hard to compare the two, for several reason.

First, Radar served under two very different commanding officers. Colonel Blake was absentminded at best when it came to paperwork while Colonel Potter seemed to have a better handle on what the job required. Radar sometimes used paperwork to confuse Blake to get around regulations, often to help Hawkeye and Trapper. Potter wasn’t as easily fooled. Klinger only served as company clerk for Potter.

Second, during his time on M*A*S*H, Radar changed dramatically. At first he was a schemer, who knew how to bend the rules. Later, Radar was a naive youngster who dutifully kept the 4077th running. In other words, he was two very different company clerks. The scheming clerk got the job done and enjoyed the occasional cigar. The naive clerk bartered and traded to find supplies to keep wounded soldiers alive. By the time he became company clerk, Klinger had mostly given up scheming, but also found ways to wheel and deal and keep the cogs of military bureaucracy turning.

3 Replies to “Discuss: Who Was the Better Clerk, Radar or Klinger?”