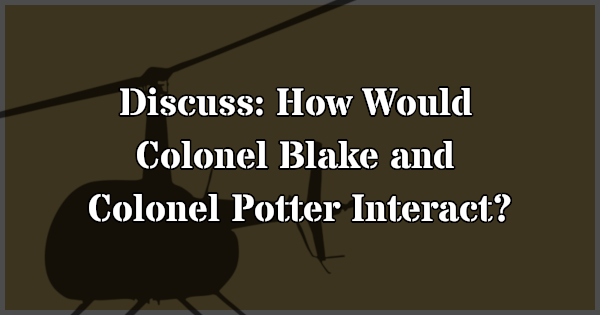 Two Men with Families, But Only One Family Man

Today we’re discussing Colonel Blake and Colonel Potter. They’re both commanding officers, surgeons, husbands, and fathers but they have very little in common. They’re both fine surgeons and both develop father-son relationships with Radar. But in many ways the two men are complete opposites. For starters, Potter is an Army man through and through. Blake was drafted. Blake is unfaithful to his wife. Potter is a devoted husband. Potter earns the respect of his subordinates. Blake is routinely ignored.

Because the two men both commanded the 4077th, there’s likely no realistic way they could ever have served together. Potter, being a full colonel, would outrank Blake. That doesn’t mean they couldn’t have spent time together if, say, Colonel Potter visited the 4077th while Blake was in command.

Let’s pretend somehow both Blake and Potter work together at the 4077th long enough to develop a relationship. How would they get along? Would Potter find Blake’s command style frustrating and incomprehensible? Would Blake chafe at Potter’s professionalism? Would the fact that Blake routinely cheated on his wife bother Potter? Or would they bond over the loneliness of command, ignoring their differences?

4 Replies to “Discuss: How Would Colonel Blake and Colonel Potter Interact?”