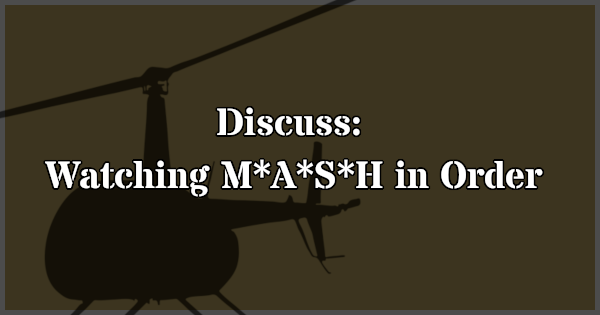 For a few months now, I’ve been considering rewatching M*A*S*H in original broadcast order, starting with the series premiere and ending with the series finale. When I finished writing my Episode Spotlight reviews, I decided to take a break from the show. After nearly five years watching and reviewing at least one episode a week, I was a little sick of M*A*S*H. Writing those reviews had become a chore, something I had to do rather than something I wanted to do. It felt like work and watching television should never feel like work.

I’ve never watched M*A*S*H from start to finish before. When I first began watching the show on cable channel FX in the late 1990s, I watched whichever episodes were on TV. I have watched individual seasons in order.

But is there a good reason to watch M*A*S*H in order rather than picking and chose which episodes to watch?

With very few exceptions, like the two-part episodes and the handful of “sequel” episodes, there are no connections between episodes of M*A*S*H. Every episode is self-contained. For the most part, that means you can watch any episode of M*A*S*H from any season and not have to worry about being confused because you missed an earlier episode.

What you will see if you watch M*A*S*H in order is how the show and the characters changed over time. M*A*S*H is at its most sitcom-y during the first three seasons. By the last few seasons, episodes are more dramatic. The earlier seasons feature more music and more extras in the background. You’ll also notice the cast aging. Notably, Alan Alda’s hair gets grayer and grayer with the passage of time.

Have you watched all 251 episodes in original broadcast order, either on DVD or streaming? Or do you prefer to watch specific episodes or random episodes or whichever episodes are on cable?