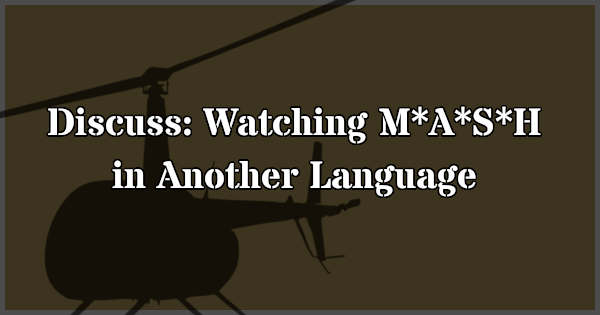 Today’s topic is: Watching M*A*S*H in another language.

The vast majority of traffic to MASH4077TV.com comes from English-speaking countries: the United States, the United Kingdom, Australia, and Canada. The show does have a loyal following in Germany and MASH4077TV.com has seen a limited number (under a thousand) of visitors from that country so far in 2019. There have also been visitors from the Czech Republic, Sweden, Denmark, and The Netherlands, to name a few.

I assume most fans from the United States, the United Kingdom, Australia, and Canada watch M*A*S*H in English. I know I do. Fans from other countries, however, may watch the show dubbed into their local language, if possible.

For many English-speaking fans, it’s possible to watch episodes in other languages, if you own either individual seasons or the complete series on DVD. The DVDs sold in the United States include optional audio tracks in Spanish and French. I believe the Canadian DVDs have English and French tracks. I’m not positive, but I think the Australian DVDs and those available in the United Kingdom only have English audio.

Has anyone watched episodes of M*A*S*H dubbed in another language? I never have. Despite taking several years of Spanish in grade school followed by four years of French in middle school and high school, I am not able to understand either language (with the exception of a few words or phrases and even then only when spoken slowly and carefully). Watching M*A*S*H in Spanish or French would be an exercise in futility. It might be interesting to watch a few minutes, to hear what the voices sound like, but I doubt I could sit through an entire episode.

I’m curious if any bilingual fans of M*A*S*H have watched episodes in two languages and compared the dialogue.

7 Replies to “Discuss: Watching M*A*S*H in Another Language”