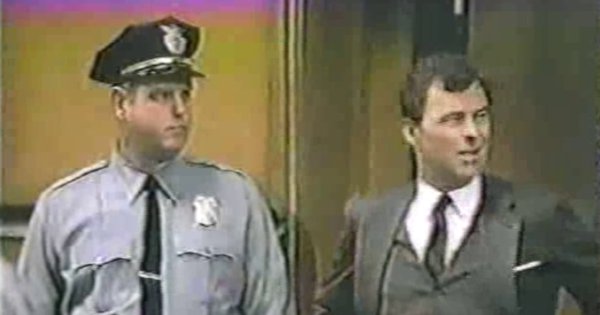 The copy of this episode floating around is missing roughly five minutes, making it hard to follow the storylines. Watching it wasn’t nearly as difficult as watching the Season 1 episode “By the Book” dubbed in a foreign language. AfterMASH expert David Goehner was kind enough to dig out his script for “Trials” and fill in the gaps for me.

It’s a real shame this episode isn’t available for M*A*S*H fans to watch in its entirety. Not only does it contain multiple references to M*A*S*H but it sees the return of Colonel Flagg.

There are two storylines: Klinger on trial and Dr. Boyer feuding with Wally Wainright while trying to save a patient’s leg. Both are solid and enjoyable, even with five minutes missing from the episode. Dr. Boyer’s storyline does feel like an afterthought, thrown in by the writers to break up the courtroom scenes, but at least it’s interesting and we get to see Boyer throw a fruit basket through a window.

The opening scene, which is missing from the episode, sets the stakes for Klinger. Soon-Lee tells him she’ll take their baby and go back to Korea to stay with her parents if he goes to prison, only returning when he’s released. Most of the characters are at the courtroom for Klinger’s trial. Potter takes the stand first, followed by Father Mulcahy, then the vagrant who shared a jail cell with Klinger, Bob Scannell, and finally Mildred Potter.

The prosecution calls one more witness: Colonel Flagg. Everyone is shocked to see him. My favorite line of the episode is probably Flagg giving the judge hints about which intelligence agency he works for: “Its got initials and we’re allowed to carry firearms in our shoes.” Why does Flagg testify? He’s been in River Bend investigating Klinger, who he thinks is either a Communist sympathizer or an actual Communist. As proof, he offers the fact that Klinger married a Korean bride who has relatives in North Korea and stayed in Korea for two months after being discharged from the U.S. Army.

Klinger takes the stand to defend himself and winds up arguing with Flagg. I would’ve preferred seeing fewer characters take the stand, perhaps just Potter and Father Mulcahy, then Flagg and finally Klinger. The vagrant, Bob Scannell, and Mildred Potter don’t offer much in the way of testimony.

Despite Flagg’s best efforts, the judge is sympathetic. He tells Klinger’s lawyer to change his plea to not guilty by reason of insanity. Klinger will be committed to the psychiatric unit at General Pershing Hospital to undergo a thorough evaluation. My second favorite line of the episode comes is Potter’s reaction to the judge’s decision: “Well, Klinger, it looks like you’re finally going to get that Section 8.

Klinger realizes he has to play along and tells Soon-Lee not to worry. He’ll pretend to be nuts for a few months, then suddenly become sane again and go free. Soon-Lee is worried but agrees to stay in the United States. Everyone leaves except Colonel Flagg, who continues ranting to the empty courtroom.

As I mentioned earlier, Dr. Boyer’s secondary storyline feels unnecessary but isn’t boring and it does help keep the courtroom scenes from dragging. Unlike Mike D’Angelo, Wally Wainright is no pushover. Dr. Boyer can’t frighten him as easily. Despite a successful surgery, Boyer and Wainright wind up threatening one another. Boyer goes as far as to threaten to kill Wainright if he ever puts the hospital ahead of one of Boyer’s patients again. Yikes.

I like everything about this episode except the way it ends. Seeing Colonel Flagg again is a lot of fun. Flagg is at his best when his wild theories sound almost rational and his paranoia is evident but not overwhelming. It’s unfortunate the episode ends with Flagg raving first to the judge and then to the empty courtroom. It makes him seem pathetic. It’s not funny. It’s a disappointing finish to such a strong episode.

Hopefully, AfterMASH will eventually be released on DVD so M*A*S*H fans can watch this episode. If anyone has a complete copy on VHS, please let me know.

A new set of opening credits, featuring live action sequences rather than color sketches, debut with this episode.

There are more references to M*A*S*H in “Trials” than any other episode of AfterMASH. And there were supposed to be more. A line in the script has Klinger mention Colonel Blake. It’s too bad the line was either not filmed or cut from the episode before airing.

During the trial, the prosecutor runs thorough a list of some of the stunts Klinger pulled in Korea:

While on the stand, Klinger tells the judge, “I lifted my skirt at Sygmun Rhee,” something I don’t remember hearing about on M*A*S*H.

When he enters the courtroom, Colonel Flagg asks the bailiff, “If I jumped out that window where would I land?” In the M*A*S*H episode “The Abduction of Margaret Houlihan” during Season 5, Flagg jumped out of a window in Potter’s office and broke his leg.

There’s yet another potential reference to M*A*S*H. During surgery, Dr. Boyer mentions seeing “one of these transplants in Tokyo during the war.” David Goehner wonders if Boyer attended the same conference Hawkeye and Trapper did in “The Consultant” and learned about arterial grafts from Dr. Borelli.

This is the first of two episodes directed by Charles S. Dubin, who directed 44 episodes of M*A*S*H between 1976 and 1983, more than any other director.

This is the 11th of 13 episodes written or co-written by Ken Levine and David Isaacs.