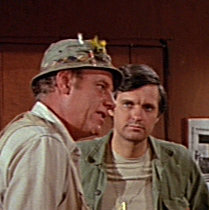 Capsule Summary: Hawkeye tries to help a soldier suffering from battle fatigue while Radar undergoes treatment for rabies after being bitten by a stray dog.

Neither of the story lines in this episode are particularly strong, and both wrap up quickly and neatly, but overall this is a solid episode. I bet Wayne Rogers was happy with his role in this episode. Not only did Trapper have the pivotal scene with Corporal Travis, he also got to chase a dog around the compound with Colonel Blake. And he Trapper got to yell at Frank. “Slug nutty!?”

Perhaps if more episodes had featured Trapper as heavily as this one, Rogers wouldn’t have left the series at the end of Season 3.

This is one of several episodes that reference Sidney Freedman without him making an appearance. Others include “Heal Thyself” from Season 8 and “Trick or Treatment” from Season 11. Although I appreciate the continuity, I’m not sure the phone call between Hawkeye and Sidney is necessary. Cutting it would offer more time to devote to Corporal Travis and his recovery. Perhaps add another scene in which Hawkeye humiliates Travis, infuriating Margaret even more.

Better yet, add a scene at the end when Margaret realizes that Hawkeye’s treatment of Travis wasn’t cruel but calculated to help him recover. When Travis walks into Colonel Blake’s office, Margaret is thrilled to see him on his feet. Moments earlier, she was ready to go over Henry’s head to support Frank in his confrontation with Hawkeye and Trapper. Frank admits he was wrong but Margaret doesn’t say anything.

Radar’s B story is notable for the lengthy scene between Margaret and Radar when she’s reading him a letter. Perhaps she’s just being the professional or perhaps she cares more about the 4077th’s company clerk than she’d care to admit.

Gary Burghoff is nearly unrecognizable lying in a bed in Post Op without his jeep cap and glasses. Without them on, Radar seems much older. He’s supposed to be 18 in this episode but Burghoff was 31 in 1974 when the episode was filmed. Burghoff is a talented actor and usually can make viewers believe Radar is much younger than the actor playing him. Not in these scenes. 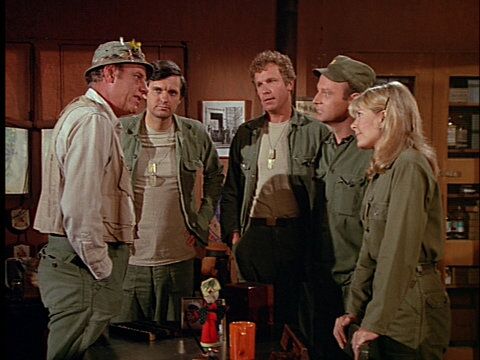 Frank and Margaret threaten to go over Henry’s head.

Rosie makes her first appearance in this episode, played by Shizuko Hoshi. The character doesn’t return until “Bug Out” in Season 4, when she’s played by Frances Fong. Eileen Saki took over the role beginning with “A Night at Rosie’s” during Season 7. Notice that the sign for Rosie’s Bar actually, seen when Radar and Colonel Blake are searching for the dog, reads Rose Bar. In the same shot, there’s an establishment called Goldie’s next to Rosie’s Bar.

Hawkeye mentions Godzilla but the first Godzilla movie came out in Japan in 1954,
the year after the Korean War ended. Likewise, the song “Wayward Wind” by Gogi Grant didn’t come out until 1956.

Not counting the dog, Radar’s animals include a raccoon, a skunk, a rabbit, and a turtle.

Jeff Maxwell is credited as Igor in this episode but I don’t remember seeing him.

Father Mulcahy and Klinger do not appear in this episode.