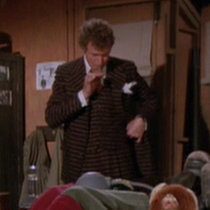 However, there are only a handful of officers at the 4077th; it’s hard to believe Hawkeye hadn’t been O.D. before. We learn in “Tuttle” that Frank enjoys volunteering for Officer of the Day duty. Maybe the only reason Hawkeye is chosen for O.D. is because Frank is temporarily in command and can’t serve as O.D. himself.

(Later episodes that reference an Officer of the Day include “The Winchester Tapes” in Season 6 and “A Night at Rosie’s” in Season 7.)

Edward Winter makes his third of seven appearances on M*A*S*H in “Officer of the Day” and isn’t given much to do. Perhaps if five minutes of the episode weren’t devoted to Frank’s review of the troops, more time could be devoted to Flagg sparing with Hawkeye and Trapper. Flagg isn’t a total buffoon like he was in “A Smattering of Intelligence” in Season 2. But his single-minded cruelty is exaggerated, particularly when he draws his pistol in the Mess Tent. And yet Margaret eats it up. Watch closely and you’ll see her smiling when Flagg brandishes his sidearm.

The most notable aspect of the episode has to be Hawkeye’s famous speech about not carrying a gun:

I’m always surprised how easily Frank gives in by allowing Hawkeye to walk around with an empty holster. Speaking of Frank, what are the odds so many South Korean locals came to the 4077th seeking medical attention (as Kim Luc) while Hawkeye was O.D. because they knew Frank wasn’t in charge?

Trapper’s horizontal pinstripe suit is a hoot, the thieving sons of his tailor Sang Yu aren’t nearly as amusing. 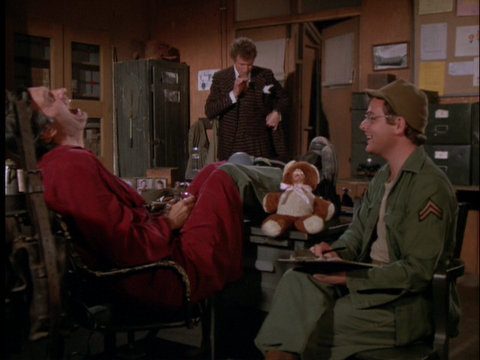 Trapper shows off his new suit.

The picture quality at the start of the episode is uneven. The wide shots of the camp gathered at attention are dark and grainy while the closeup shots of Radar and his bugle, Frank and Margaret, and Igor with the cannon are clean and crisp.

When Hawkeye leaves the Swamp after talking with Trapper about Flagg, he snatches a baseball out of the air and tosses it to a soldier wearing a glove. Was this scripted or did Alan Alda improvise?

Radar talks about an older brother in this episode. He later references a little brother who died in “The Price of Tomato Juice” in Season 4. And in at least two episodes, he mentions having a sister. But most of the time, he’s an only child.

Why is there a cot in Henry’s office? Is Frank so paranoid that he sometimes sleeps in the C.O.’s office when he’s temporarily in command?

Roy Goldman, Kellye Nakahara, and Gwen Farrell are among the extras seen in formation during Frank’s inspection.

Richard Lee Sung and Jerry Fujikawa make their first appearances on M*A*S*H in this episode. The actress who shows up as the third “Kim Luc” is uncredited despite having a line of dialogue.

McLean Stevenson and William Christopher don’t appear in this episode.

15 Replies to “Episode Spotlight: Officer of the Day”