In my opinion, “Settling Debts” would work better if the A and B stories were swapped. Colonel Potter growing increasingly upset about the letter Mildred sent Hawkeye is too silly. Angry Potter is sometimes funny, sometimes over-the-top. Here, it’s definitely over-the-top. He convinces himself that Mildred has purchased a houseboat and doesn’t like it.

Watching Father Mulcahy run back and forth trying to gather everyone together while Margaret and Klinger try to stall Potter gets old quick. Charles is an afterthought, his few scenes forgettable, even as he gets increasingly drunk.

The minor B story involving the young Lieutenant Pavelich and his men offers a dramatic counterpoint to the humorous A story. It is a little paint by numbers, though. Viewers are introduced to Pavelich. They’re told he’s a solid young officer who takes care of his men. He returns to the 4077th, wounded by sniper fire. Worse yet, he tells B.J. he can’t feel his legs.

Obviously, we’re supposed to be especially depressed to see Pavelich paralyzed. After all, he gave up a safe desk job in Paris so he could serve on the front lines and get his hands dirty. His men love him. Sgt. Lally captures the sniper who shot Pavelich. Lally is so upset at the thought of his beloved lieutenant never walking again that he’s willing to kill the sniper in cold blood. But then Pavelich wakes up and tells Lally to put his gun away, proving once again he’s an upstanding officer and human being. Interestingly, we never learn if Pavelich is permanently paralyzed.

As I said earlier, I think I’d like this episode more if the A and B stories were swapped. However, I’m not sure how to expand the B story. Perhaps by having Sgt. Lally and his fellow soldiers tell Hawkeye and B.J. tales of Lt. Pavelich’s dedication. Maybe Pavelich could try to write home to tell his wife or his parents that he’s been paralyzed. Or what if Pavelich was the one who wants to murder the sniper, only to change his mind at the last minute and call off Sgt. Lally.

The A story, on the other hand, is easily trimmed. Cut out everything involving Klinger and Margaret keeping Colonel Potter away from his tent. Cut out a few of Potter’s angry outbursts. Have him curious and perhaps concerned about the letter rather than furious and fuming. 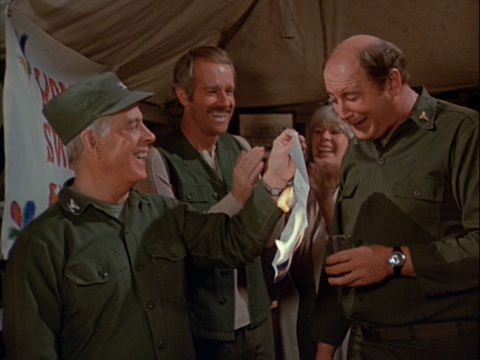 Look closely and you’ll see the piece of paper Hawkeye gives Colonel Potter actually does say MORTGAGE on it. I wonder if a member of the cast or crew brought a copy of their actual mortgage to the set so they could see it go up in flames.

The framed picture hanging in Colonel Potter’s tent, to the left of the door, changes during the episode. Likewise, the bulletin board to the right of the door has a photograph and two pieces of paper on it at one point but later, during the party at the end of the episode, the photograph is missing.