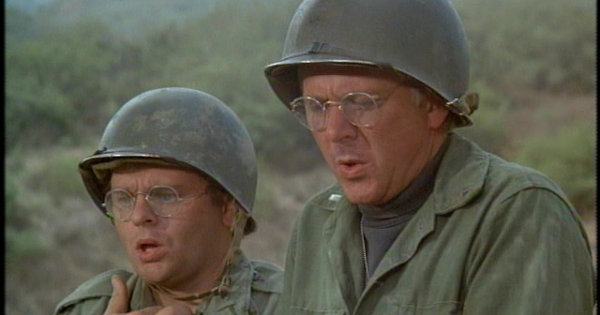 Capsule Summary: Father Mulcahy, worried he hasn’t experienced real war, travels to an aid station at the front lines to pick up a seriously wounded patient.

“Mulcahy’s War” is the first of several episodes of M*A*S*H that dealt with Father Mulcahy’s fear he doesn’t make an impact at the 4077th. Despite hearing from Colonel Potter that he has “the toughest job at camp,” Mulcahy decides to head to the front and see for himself what soldiers deal with. Is it fair of Private Fitzsimons to criticize Father Mulcahy for not having been in battle? I don’t think so but Mulcahy clearly does.

Of course, a brief visit to an aid station near the front lines isn’t the same as sitting in a foxhole for weeks while your buddies are picked off by snipers. Father Mulcahy still doesn’t know what front line soldiers go through and he knows it. But Fitzsimons is impressed enough that he’s willing to at least talk with Father Mulcahy. We don’t learn what will happen to Fitzsimons. Will Frank wise up and insist on a court-martial? If sent back to the front, will Fitzsimons shoot himself in the foot again?

The B story is silly but harmless. It’s no surprise Frank would get upset about operating on a dog. I do like Hawkeye’s reaction when he’s told the dog’s name is Cupcake. There were K-9 units in the U.S. Army during the Korean War. Perhaps Cupcake was based on a real dog.

Why would Radar, the company clerk, go with Igor to the aid station to pick up a wounded soldier? Shouldn’t another corpsman like Goldman go with Igor?

Although unconfirmed, there are those who believe the aid station sergeant’s dialogue has been dubbed by Johnny Haymer (better known for portraying Sergeant Zale). I have to admit, the sergeant does sound an awful lot like Zale. Richard Foronjy is credited as playing the unnamed, mustachioed sergeant.

I vaguely recall reading about someone successfully performing a tracheotomy and crediting this episode for helping them pull off the procedure. Does that sound familiar to anyone else?