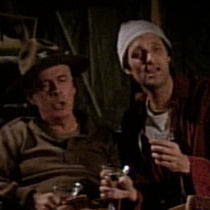 Capsule Summary: Frank is distraught and Hawkeye worried when the Army decides to replace as commander of the 4077th with a career officer named Sherman Potter.

Watching this episode, I can’t help wondering what might have been. If you know your M*A*S*H history, you’ll know that McLean Stevenson and Wayne Rogers left the series after Season 3. The producers and writers knew that Stevenson wanted out and began to plan accordingly. Colonel Blake needed to be replaced. Things with Rogers weren’t so clear cut.

Larry Gelbart had this to say about “Change of Command” in a May 2000 post to the alt.tv.mash Usenet group:

With Stevenson definitely gone at the end of season 3, plotting began on what would have been the first episode of Season 4 – “Change of Command.” The work was done during the hiatus between (seasons) 3 and 4.

During that period, we sweated out the Rogers situation – would he leave the show, wouldn’t he, etc. When it became clear that he was leaving, we began casting for another actor and preparing the script for “Welcome to Korea,” without a whole lot of time to get it ready.

How would “Change of Command” be different with Trapper instead of B.J.? Most of B.J.’s dialogue could easily come from Trapper. But this conversation between Hawkeye and B.J. about the new bar in the Swamp wouldn’t exist:

Hawkeye: “Henry would’ve loved this.”
B.J. “Fair man with a bottle, you say?”
Hawkeye: “Henry? He could have been a comparison drinker. The man was born with a spare tank. I really miss him.”
B.J. “How about the Henry Blake Memorial Bar?”
Hawkeye: “I’ll buy that. Let’s break it in. I’ll throw out the first drunk. With any luck it’ll be me.”

Instead, Hawkeye and Trapper would likely reminisce about Henry together. Unlike B.J., Trapper would immediately know to worry about Sherman Potter the regular army man, the way Hawkeye did. And Trapper’s personnel file would be just as bad as Hawkeye’s.

It’s possible, with Trapper involved, the episode would play out differently. But I doubt it. The bulk of the episode focuses on Colonel Potter and, to a lesser extent, on Frank. B.J. doesn’t have a large role and neither would Trapper. Frank would still fall apart in Margaret’s tent and later disappear. Colonel Potter would still order Klinger to put on a regulation uniform. Hawkeye would still worry about Potter in the O.R.

“Change of Command” does what it needs to do: it introduces Colonel Potter. He may be regular army but he’s neither as strict nor as inexperienced in surgery as Hawkeye fears. Viewers learn he served in previous wars, loves horses, has a wife named Mildred, enjoys a drink or two, and can be flexible when it comes to Klinger.

But why isn’t Potter concerned that one of his officers is nowhere to be found? Not only is Frank absent from the meeting in Potter’s office, he also doesn’t show up for surgery when wounded arrive. At the very least, Potter should wonder where one of his surgeons is. 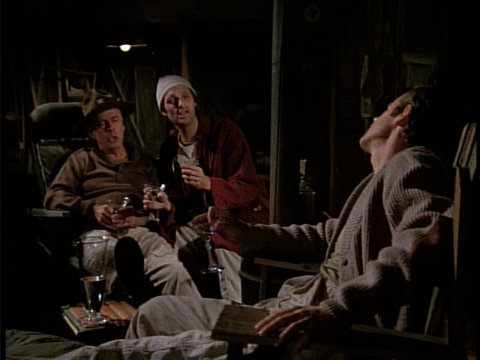 Drinking and singing in the Swamp.

The scene in which Colonel Potter arrives at the 4077th was shown at the end of “Welcome to Korea” the week before this episode aired. It gave viewers a preview of the new commanding officer, enticing them to tune in next week and see what happens to the gang at the 4077th.

Colonel Potter asks Radar to straighten his picture of Lillie Bell. Instead, Radar manages to leave it crooked in the other direction. By the end of the episode, however, it’s entirely straight on the wall.