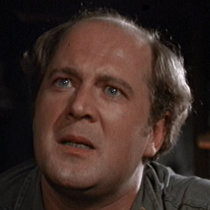 Capsule Summary: Charles returns from a drunken weekend in Tokyo to discover he has a wife.

Although the Charles A story is amusing, part of me can’t believe Chuck Emerson Winchester III would allow himself to get drunk enough to black out for much of a weekend. He’s been drunk before but he always had a reason. In “The Billfold Syndrome” he drowned his sorrows over losing a position stateside while in “The Young and the Restless” he spent three nights drinking after a hotshot young surgeon makes him question his abilities.

(He’ll turn to the bottle again later in Season 8 when Honoria tells him that she’s marrying an Italian in “Bottle Fatigue.”)

As much as Charles enjoys the occasional glass of expensive brandy, he doesn’t typically drink to excess. He’s not the kind to get drunk and go wild. He admits he’s only come close to being as drunk as he was in Tokyo once before in his life, the night he graduated from Harvard. At no point does he question why he partied so hard even though it’s completely out of character. Of course, he proceeds to get very drunk again at the party to dissolve his marriage.

My favorite part of the episode has to be Charles dramatically asking “What is your name?” after realizing he isn’t married to the complete stranger sitting across from him in the Swamp. David Ogden Stiers infuses the line with the perfect blend of confusion, desperation, and embarrassment. The party at the end is great, too, with J.B. Honeydew performing the unmarriage:

The hemorrhagic fever B story is forgettable. I do appreciate how frustrated Hawkeye and B.J. feel about not being able to help Corporal Shaw:

Hawkeye: “If there was only something we could stitch or rebuild. A piece of something we could take out. This is agony.”
B.J.: “It’s a strange feeling, isn’t it? Inside this kid’s body there are microscopic armies. fighting a war bigger than Korea.”
Hawkeye: “And we can’t even get in it.”

Fortunately, the two brilliant doctors come up with a way to save Shaw’s life. The fate of the other two cases of hemorrhagic fever, mentioned by Hawkeye and B.J., is never revealed. Presumably, they survive as well.

This isn’t the first episode involving hemorrhagic fever. Frank came down with it in “Soldier of the Month” during Season 4.

B.J. (as J.B. Honeydew) is reading from a comic book while unmarrying Charles and Donna. The cover is never shown but it looks to me like there’s some sort of animal on the page shown on screen. Maybe a bear.

Among the uncredited extras enjoying the party in the Mess Tent are Jo Ann Thompson, Gwen Farrell, Kellye Nakahara, and Roy Goldman.

6 Replies to “Episode Spotlight: Mr. and Mrs. Who?”