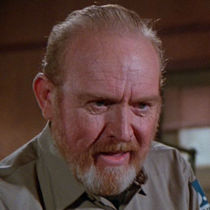 Capsule Summary: Hawkeye is dismayed to learn that charismatic war correspondent Clayton Kibbee intends to make war seem grand and exciting–even if he has to embellish the truth for his readers.

The great Clayton “Clay” Kibbee comes to the 4077th and everyone, from Colonel Potter to Charles, is impressed. Clay is a legend. He’s “the ultimate sportsman” and “confidant of kings,” according to Charles. Margaret thinks he’s “manly and rugged and virile.” Charles is even grudgingly willing to let Clay call him Chuck, that’s how dazzled he is.

But Clay the man doesn’t quite live up to Clay the legend. When the story of the first soldier to receive a donated pint of blood turns out to be less than impressive, Clay makes up his own story. Hawkeye overhears and confronts Clay:

Hawkeye: “You make this sound like some glorious escapade. Something every American boy should aspire to. In case you haven’t noticed, this is ugly. It is not exciting. Underline not.”
Clay: “Well, you got that wrong, son. Back home is not exciting. It’s the war they want to read about. The romance, the heroics, the glory.”
Hawkeye: “That doesn’t exist.”
Clay: “That’s why I’m here. I make it exist.”

Hawkeye’s righteous indignation isn’t shared by Margaret and B.J. Margaret is too charmed by Clay and B.J. only cares about his motorcycle. By the time he realizes the truth about Clay, it’s too late. Clay has stolen the bike. Hawkeye and B.J. find him lying on the side of the road, wounded by his own tequila bottle. Clay lives, but the bike is a goner.

Interestingly, although Clay appears to get his comeuppance, Colonel Potter and Father Mulcahy still seem to worship the man in the tag scene. And despite Hawkeye’s hope that he got through to Clay, the reporter’s next column was filed from the jungles of Indochina. Clay hasn’t changed at all.

I wish Clay’s thoughts about war could’ve been explored more. He’s used to a different kind of war and doesn’t understand the “policeman’s tea party” that is the Korean War or his role in it. Why don’t we get a scene between Clay and Potter, talking about their adventures in World War 2? Having Clay get drunk and steal B.J.’s motorcycle feels like the easy way out, in my opinion.

The minor storyline involving Lieutenant Lacey breaking a date with Hawkeye so she can have a drink with Clay adds nothing to the episode. Hawkeye later sends Potter and Father Mulcahy to intrude on Lacey and Clay at the Officers’ Club. Cut both these scenes out and there’s plenty of time for a deeper examination of Clay’s motivation. 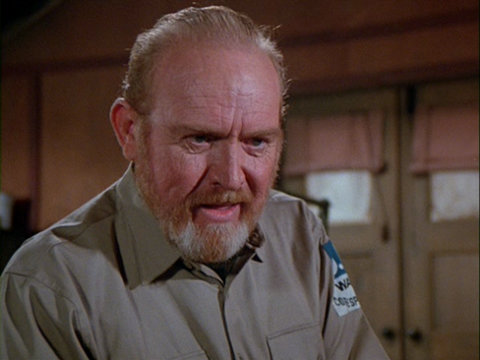 Rita Wilson makes the first of two appearances as Lieutenant Lacey in this episode. She returns in “Hey, Look Me Over” during Season 11, although the episode was actually filmed for Season 10.

The actor who plays Private Belson, who received the second donated pint of blood, isn’t credited. According to the Internet Movie Database, Belson is played by Stoney Jackson.

B.J. acquires a motorcycle in this episode. He repairs it, only for Kibbee to steal it and wreck it again. B.J. memorably uses a different motorcycle to depart the 4077th in “Goodbye, Farewell and Amen” at the end of Season 11.

I believe the brief mention of Clay’s visit to Indochina is one of only two references on M*A*S*H to the Vietnam War, although it’s an indirect reference at best. During the Korean War, France was fighting Viet Minh forces in Southern Vietnam in what’s known as the First Indochina War. It ended in 1954 with the partition of the country into North and South Vietnam. The Vietnam War (also known as the Second Indochina War) began the following year.