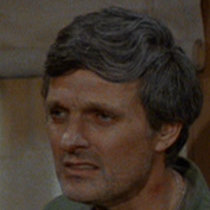 I’m expecting a strong reaction in the comments section to this episode. I get the impression a lot of fans hate it. Yet there are many fans who consider it a solid episode. At the moment, it enjoys a 7.6/10 rating at TV.com and a similiar 7.3/10 at the Internet Movie Database.

I don’t know about anyone else, but I’ve never heard someone sneeze the way Hawkeye does in this episode. It doesn’t sound like a sneeze, to be honest, which of course it isn’t. Alan Alda is doing his best to fake a sneeze but I’m not sure it’s something you can fake.

Hawkeye’s sneezes start with a forceful inhalation before stopping abruptly. There’s no balance, no follow-through. They sound unnatural to me, which is why each and every sneeze pulls me out of the episode. If only the writers had come up with some other way for Hawkeye’s repressed memory to manifest itself. Cut out the absurd sneezes, and the episode improves dramatically.

When Hawkeye stumbles into Colonel Potter’s office and declares “I’m going to die,” I believe him. He looks awful. The sneezing has been joined by furious and scratching. After Sidney Freedman arrives, Hawkeye repeats his prediction that he’s going to die:

I may criticize his sneezing, but Alan Alda does a superb job selling Hawkeye’s terror and his sense of helplessness. Sidney suspects Hawkeye will figure out what’s wrong with him when he’s ready–and he’s right. A horrific childhood memory eventually resurfaces. When Hawkeye was seven, he was fishing with his beloved older cousin Billy and Billy pushed him into the water. Hawkeye almost drowned. He nearly died. Unable to handle the betrayal, young Hawkeye altered the memory so he wouldn’t remember Billy pushing him, only Billy saving his life.

Contrast Hawkeye’s fear of what’s happening to him earlier in the episode with his hysterical wailing as he remembers his childhood trauma, remembers being pushed by Billy. It’s too much, too melodramatic. The wailing is particularly painful. That said, I have no idea how I’d react if I suddenly remembered my cousin trying to kill me when I was a child. Perhaps I shouldn’t judge Hawkeye too harshly for his histrionics.

“Bless You, Hawkeye” isn’t a favorite episode but I don’t loathe it the way some do. It’s greatest failing isn’t fake sneezing or overwrought emotion, but repeating a storyline used earlier in the series. “Hawk’s Nightmare” from Season 5 is nearly identical. Rather than sneezing and scratching, it features nightmares and sleepwalking. In both episodes, Sidney arrives at the 4077th to help Hawkeye. In both episodes, Hawkeye is dealing with a psychological issue relating to his childhood. 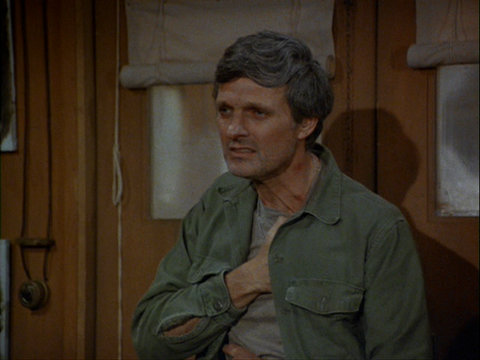 This is the first of three episodes directed by Nell Cox. The others are “Heroes” from Season 10 and “Run for the Money” from Season 11. She directed more episodes than any other woman. In fact, she’s the only woman to direct more than a single episode.

If for some reason you’d like to watch a supercut of every single one of Hawkeye’s sneezes from this episode, here‘s a link to a YouTube video. Enjoy.

It looks like B.J. is playing pyramid solitaire in the Swamp right before Hawkeye starts tossing things out the door.

Colonel Potter makes a Judge Crater reference in relation to missing keys to the lab. Crater famously disappeared in 1930. His disappearance remains unsolved to this day.