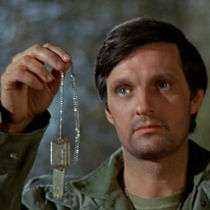 Capsule Summary: Hawkeye makes up a fictional captain and things quickly get out of hand.

“Tuttle” is a wonderful, low-key episode. I don’t have much to say about it, to be honest, because there isn’t much to it. While donating supplies to Sister Theresa, Hawkeye tells her the name of the man responsible for the supplies: Captain Tuttle. Trapper plays along, leading to this exchange:

Poor Trapper looks like he’s having an existential crisis.

The next day, Hawkeye tells Trapper that Tuttle was his imaginary friend when he was a kid. Radar hears the story, too, and reveals he also had an imaginary friend, a girl named Shirley. When Radar brings requisition forms for Henry to sign, Henry starts asking questions about Captain Tuttle. He also wants Tuttle to serve as officer of the day.

From there, events quickly spiral out of control. Suddenly, everyone wants to know about Captain Tuttle. Frank and Margaret have questions of their own. Hawkeye, Trapper, and Radar are forced to fabricate a personnel file for Tuttle. Hawkeye even has to impersonate General Clayton. Unfortunately, the real General Clayton announces he’s coming to the 4077t to give Tuttle a commendation.

Backed into a corner, Hawkeye has only one option: kill Captain Jonathan S. Tuttle. In front of the entire camp, Hawkeye delivers a touching eulogy:

Hawkeye: “We can all be comforted by the thought that he’s not really gone, that there’s a little Tuttle left in all of us. In fact, you might say that all of us together made up Tuttle. Our grief will pass. It’s already hard to remember exactly how Johnny looked, how he talked, his little laugh. Thankfully he’s left behind a memorial. I’ve been informed by Radar that Captain Tuttle’s G.I. insurance named Sister Theresa’s orphanage as his sole beneficiary. How typical. We salute you, Captain Tuttle, humanitarian and healer. Good luck, doctor, in that great big waiting room in the sky.”

Is this episode at all plausible? No, I don’t think so. But that’s what makes it so funny. There’s no way Hawkeye, Trapper, and Radar should’ve been able to trick everyone, to convince so many people of Captain Tuttle’s existence. Yet somehow they pull it off.

However, it is a little difficult to believe Margaret would be fooled Hawkeye’s impersonation of General Clayton. 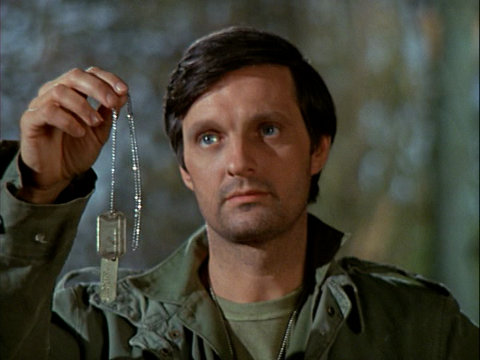 Larry Gelbart revealed the inspiration for this episode in a January 2001 post to the alt.tv.mash newsgroup:

Didn’t mean to tittilate [sic] (or should that be tuttlate?).

Some pre-MASH years ago, while still living in London, I saw a marvelous program on the BBC. It was an English adaptation of a French play, it’s English title (or shoud [sic] that be tutle?) was “Lieutenant Tenant.”

It was the story of a lowly private in the Russian army in Napoleonic times, who volunteered to act an officer’s clerk, even though the private was barely literate. He just wanted to able to work in a cozy, warm office instead of being out in the freezing cold.

The first time he was required to take dication [sic] from the officer, the private, a pen in his totally (or should that be tuttaly?) inexperienced hand, he was in trouble.

The officer, writing to another officer, began his dictation, “My dear
Lieutenant … ” The private, repeating the word out loud, as he slowly tried to write, “Lieu-ten-ant.” making the officer impatient, prompting the private to go write faster, he repeated the last two-thirds of the name, “Ten-ant.” The result was the private started the salutation by writing, “My Dear Lieutenant Tenant.”

The letter was sent out to a totally fictitious officer. What happened next, you can guess, considering the nature of this thread.

I was so taken with the idea of the play, I checked into its availability for an American adaptation. Other ideas and events intervened, and I never got around to doing one. And, then, along came MASH….

Gelbart is referring to a 1962 French play titled Lieutenant Tenant, written by Pierre Gripari, based on a novella by Yury (Yuri) Tynyanov.

The original script did not include Hawkeye’s eulogy for the late Tuttle. Here’s Larry Gelbart’s explanation, from a May 2002 post to the alt.tv.mash newsgroup:

Hawkeye’s speech (about Tuttle) was written after we did the exteriors. Just felt that sort of euolgy [sic] was necessary.

That’s why we had to shoot it on the set.

Sparky (aka Sgt. Pryor) makes his one and only on-screen appearance in this episode.

Radar is seen reading an issue of Captain Savage and His Battlefield Raiders that wasn’t published until January 1969.