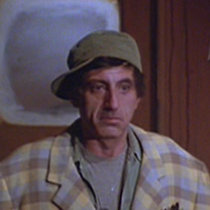 Capsule Summary: A USO troupe spends a few days at the 4077th, providing entertainment while also causing some problems.

It’s a good thing this is an hour-long episode, because there is a lot going on as the five members of the visiting USO troupe interact with doctors and nurses at the 4077th. I think “That’s Show Biz” has a bad reputation among M*A*S*H fans. But with so many characters and storylines, there’s probably something for everyone to like, if they give the episode a chance.

It all starts when singer Marina Ryan arrives at the camp via helicopter. She needs to have her appendix removed. The rest of the USO troupe soon arrives: Brandy Doyle, Sarah Miller, Ellie Carlyle, and Fast Freddie Nichols. Brandy is a burlesque dancer, Sarah sings and plays guitar, Ellie plays the accordion and the piano and sings, and Fast Freddie is a comedian and acts as emcee.

Charles can’t stop laughing at Fast Eddie’s jokes, even though he knows they’re terrible. Hawkeye and B.J., on the other hand, can’t wait for the laughter to stop. Klinger is a huge fan of Eddie as well but fails miserably when given the chance to perform alongside his comedy idol. Klinger also annoys Eddie by constantly joking, an all-too-obvious comparison to the way Eddie annoys Hawkeye and B.J. Is there anybody out there who enjoys Fast Eddie and his jokes? I doubt it. He’s worse than Jackie Flash, the emcee in “Showtime” from Season 1.

Hawkeye soon realizes that Marina has fallen in love with him. He doesn’t encourage her, knowing nothing can happen between them. He doesn’t want to take advantage of her feelings and he’s also not the man she thinks he is. Their conversation takes a somber tone at the end:

Hawkeye: “I’ve seen too much ever to be wide-eyed again. We’re the wrong blood type. We don’t match. Innocence-positive and lechery-negative.”
Marina: “Let me stay. I’ll prove you’re wrong.”
Hawkeye: “No, no. It’s not worth the risk. Remember, you did ask me not to leave a scar.”

Would Hawkeye from Season 1 keep his distance from Marina? I’d like to think so, due to her age and the fact that she’s his patient. His storyline here is weak. Rather than fall for Hawkeye, why couldn’t Marina develop feelings for Private Nowicki instead? Maybe she convinces herself she can break him out of his shell. She does, the way the episode plays out, but what if she doesn’t? What if she fails and decides she has nothing to offer. Hawkeye has to convince her to stay in the USO and help other soldiers.

Margaret initially has doubts about Brandy but the two become fast friends. Brandy has her eyes on Colonel Potter. Potter is starstruck at first before realizing Brandy has more than friendship in mind. Neither of these storylines develop enough to make much of an impact. Potter and Brandy is vaguely reminiscent of “Lil” from Season 7.

Sarah is trying to find a pair of ballet shoes her brother had with him when he was killed. She asks Father Mulcahy for help. Margaret offers her support as well. This is one of the more interesting storylines and my favorite, if I had to pick. I also like Charles bonding with Ellie over their shared love of classical music. Both are thin, however, and I don’t know how they’d play out if expanded.

Ultimately, “That’s Show Biz” fails simply because there are too many characters and storylines. Cut out Eddie and Brandy and I think the episode improves dramatically. As is so often the case, the need to give most of the main characters substantial roles proves to be the episode’s downfall. Curiously, B.J. doesn’t have much to do in this episode. He stands around a lot and doesn’t like Eddie’s jokes, but that’s about it. 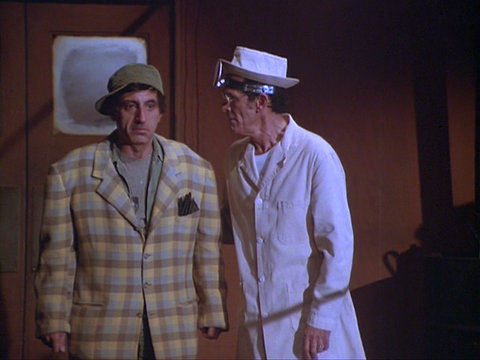 Klinger flails during a comedy bit with Fast Eddie.

“That’s Show Biz” was the fifth and final hour-long episode of M*A*S*H. Although aired as the Season 10 premiere, it was produced during Season 9 as two half-hour episodes with production numbers Z419 and Z420.

Why is B.J. sitting on a bicycle at the end of the episode while saying goodbye to Marina?

Where did Klinger get an accordion on such short notice?

The medic who helps Marina at the start of the episode, the pilot who brings her to the 4077th, and the wounded soldier who gives Hawkeye the ballet shoes are all uncredited.