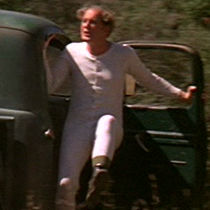 Capsule Summary: The 4077th is in desperate need of sodium pentothal, forcing Father Mulcahy to turn to the black market.

Curiously, there’s no mention of Father Mulcahy’s encounter with black marketeers in “Tea and Empathy.” He does tell Colonel Potter, Hawkeye, and Margaret that he sometimes deals with the black market to obtain supplies for orphans. M*A*S*H rarely worried about continuity between episodes.

Yet there is continuity in “Out of Gas”: Charles is forced to give up the polar suit his parents sent him in “Baby, It’s Cold Outside” earlier in Season 7. Sadly, although the pentothal is recovered, Charles has to leave the polar suit–and his uniform–behind.

Is it just me, or is the first half of the episode filled with scenes that aren’t necessary? The poker game at the beginning of the episode is amusing but doesn’t add much to the story. Neither does the lengthy scene in Potter’s office in which Zale reveals how he traded the pentothal to the 8063rd for plasma. It’s not until Father Mulcahy mentions the black market that the episode starts to get interesting.

Perhaps more could’ve been done with the 4077th using ether and local anesthetic during surgery. Yes, we see a nurse fumble while administrating ether, and Margaret accidentally breathes in ether and passes out, but these aren’t serious incidents. “Major Topper” during Season 6 dealt with a lack of painkillers for wounded in Post Op but I can’t recall another episode involving surgery without proper anesthetics. 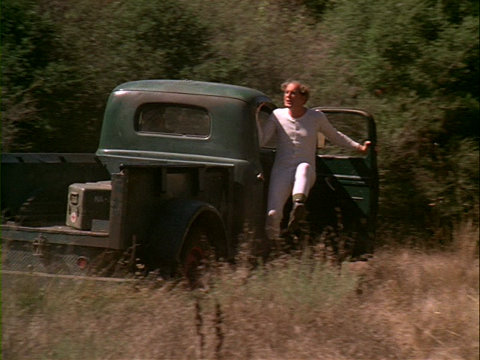 Why is this episode called “Out of Gas”? Unless I’m mistaken, sodium pentothal (a brand name for sodium thiopental) is injected, not administered as a gas like nitrous oxide (also known as laughing gas). For the record, ether (or diethyl ether) is a liquid and is indeed very flammable.

Margaret mentions two nurses by name during surgery. She asks Caldman to take over for her so she can show Carson how to administrate ether. Earlier, Carson told Charles she’d never used ether before. Despite the line of dialogue, the actress is uncredited.

Imagine how much paper work Colonel Potter and Radar had to fill out relating to the jeep Father Mulcahy and Charles abandoned to the black marketeers.

Are we really supposed to believe Goldman doesn’t know how to mop a floor?

13 Replies to “Episode Spotlight: Out of Gas”