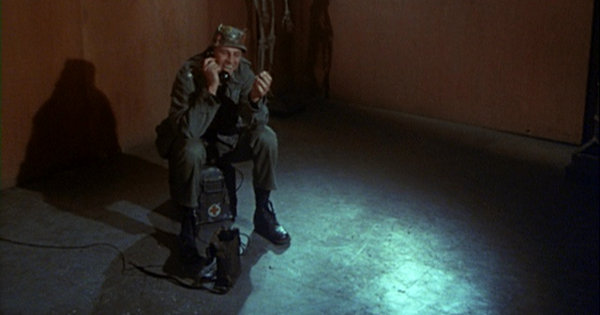 Capsule Summary: The 4077th grapples with lack of fruit, toilet paper, winter clothing, and other necessities after supply lines are cut.

This episode may very well have the best last line of any episode of M*A*S*H. Henry, sitting alone in his office, which has been stripped bare, tells someone on the phone, “I’m talking to you from deep inside a real big empty.” The way McLean Stevenson emphasizes the word “real” is just hilarious.

It’s interesting how little actually takes place during this episode. There’s no real plot, just the story of the 4077th facing a crisis. We see most of the characters dealing with their assigned duties. Frank is in charge of conservation, distribution, and possible rationing of food. He berates Klinger and Father Mulcahy for wasting coffee means playing bingo. Later, he “requisitions” a baked ham to share with Margaret. In other words, he stole it, and it doesn’t seem to bother him at all. At least he takes responsibility for his actions. Hawkeye and Trapper graciously offer to keep their mouths shut about Frank’s transgression.

Trapper is in charge of heat and electrical power. He burns Radar’s clipboard, orders Margaret to get rid of her hot plate, and allows 30 minutes of radio use at night in the Swamp. Radar is housing officer and takes his job seriously. Margaret is responsible for looking after her nurses, who impress her by acting in the Yankee Doodlest manner. Father Mulcahy is in charge of morale, which means bingo and songs.

That just leaves Hawkeye. He’s in charge of maintenance and general service and supplies but we never see him doing anything other than cracking jokes.

The running gag about Henry’s desk getting smaller and smaller as people cut it apart for firewood is amusing. That said, I find it hard to believe anyone would actually do something like that. Frank confronts two corpsman, played by Jeff Maxwell and Dennis Troy, who are burning desk drawers presumably taken from Henry’s desk.

At least two nurses post messages on the bulletin board hoping to find someone to keep warm with:

-Uninhibited nurse interested in Nietzsche, Freud, Beethoven and pre-Columbian art, will spend evening with anybody with five pieces of wood.
-Hungry? Cold? Tired of it all? Come to tent nine, change into something comfy, put on mask and wait. No appointment necessary.

There are so many great bits of dialogue throughout the episode. I particularly enjoy this exchange:

Trapper: “What’s for dinner? Brick again?”
Hawkeye: “I gotta heat my cot. When all this is over, I’m gonna invent an electric bedpan.”
Trapper: “Yeah, sure.”
Hawkeye: “Oh, you scoff. They laughed at Orville Wright when he invented his brother Wilbur. They said he would never get him off the ground.

I also like the hunting socks bit. Henry returns from the latrine to find Hawkeye and Trapper wrestling with Frank. “They’re hunting socks, sir,” Radar explains. “At this hour?” Henry asks.

Larry Gelbart discussed “Crisis” a handful of times at the alt.tv.mash Usenet group. In a July 1999 post he had this to say:

We (Marks) and I had a particularly good time writing this one. Sometimes you get on a roll and I think we had a pretty good one going throughout the second season (given the odd clinker here and there).

He shared a similiar sentiment in a December 2003 post:

> Any comments on anything about this episode Elsig?

Only to say that it was one of those scripts that was just a joy to develop, to write and to help come to life.

The final (uncut) result, l think is a testament to how much fun we had making it.

Seven nurses are seen in Margaret’s tent–plus Margaret herself and, of course, Klinger. I recognize Kellye Nakahara, Gwen Farrell, and Sheila Lauritsen (I think).

Why is Father Mulcahy singing in front of a microphone in the Mess Tent? Is his performance going out over the PA system?

Whatever happened to Hawkeye’s pair of longjohns, the ones passed around the camp in “The Longjohn Flap” from Season 1?

When Hawkeye grabs the satchel with the baked ham off Margaret’s desk, Trapper brandishes the flashlight attached to his clipboard as a gun, pointing it at Frank, who actually seems scared.