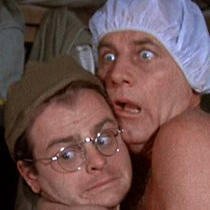 Capsule Summary: A sniper opens fire on the compound, forcing the doctors and nurses of the 4077th to take cover and hope the Army can come to their rescue, but things go from bad to worse when an ambulance arrives with wounded soldiers.

If you can overlook the amazing ineptitude of the sniper and the somewhat unbelievable ending, this is a solid episode. There’s really just the sniper storyline, with various plot threads connected to it. Hawkeye’s date with Lt. Suzanne Marquette is just an excuse to get him outside and help kick off the sniper attack. His conversation with Suzanne about the juxtaposition between the beauty of Korea and the horror of the war feels heavy handed but I think that’s the point.

Frank’s fake macho attitude and his gun weaves in and out of the episode. Hawkeye and Trapper are disturbed to see him waving it around. Margaret finds it alluring. Yet when the sniper attacks, Frank’s innate weaselness comes out. Somehow, Margaret’s attack on his masculinity is enough to get him outside “hunting” the sniper but of he doesn’t get very far. Frank firing the gun in the Mess Tent is a rare example of a main character using a weapon.

Colonel Blake and Radar trapped the shower tent is hilarious. Radar shows a lot of bravery volunteering to run to his office so he can make a call to headquarters. And Colonel Blake reveals his bravery when he opens the tent door and calls out to the sniper. The two are finally able to escape when the ambulance arrives, using it for cover to dash from the showers to Radar’s office.

The surrender unfolds as one might expect. Hawkeye thinks surrendering will mean the 4077th can continue to operate as a hospital. Trapper seems to agree with him. Frank is opposed to surrendering as anti-American. Margaret worries about what might happen to the women at the camp. As for Henry, all he can think about is how strongly he was told never to surrender without checking.

Where were the MPs during the sniper attack? At the very last, they should’ve escorted Hawkeye to the sniper after the helicopter opened fire. Are MPs only called to the 4077th when needed and not actually stationed there? Frank had his sidearm but nobody else brandished a weapon. There must be rifles stowed away somewhere; Klinger often carried one on patrol duty.

Despite the overwhelming firepower of the machine gunner in the helicopter, it doesn’t seem like a great idea for so many people to spill out of Post-Op and stand around in the compound. The sniper easily could’ve opened fire and wounded or killed any number of people. It’s also hard to believe the sniper survived the initial barrage, let alone surgery. 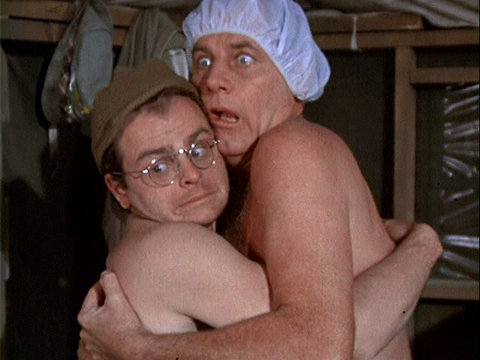 Radar and Henry during the sniper attack.

“The Sniper” contains an incredible scene in which Radar runs around wearing a towel under fire from the sniper. The scene culminates with poor Radar losing his towel and revealing a brief shot of his bare behind. According to the Internet Movie Database, this was “the first American prime time television episode to feature male nudity,” which is a claim I can’t confirm or deny. In TV’s M*A*S*H: The Ultimate Guide Book by Ed Solomonson and Mark O’Neill, Gary Burghoff explains that his towel was “rigged so it would come off right at the moment I entered the shower tent.”

In a February 1997 post to the alt.tv.mash Usenet group, Larry Gelbart explained the reasoning behind the brief nudity:

We did not show th[e] briefest of flashes of Radar’s behind because we thought it was what viewers were dying to see, but because we thought the idea was funny – and that war strips you naked and reduces you to almost infantile helplessness. It might be difficult in these days to appreciate how such an innocent shot pushed the envelope in terms of what a network would a seires [sic] to show or do.

Gelbart later suggested in an August 2002 post that CBS didn’t object to the nudity:

No one gave Radar’s rear cleavage a second thought. Now, if we’d shot a brief(less) butt shot of Hot Lips ….

Also in TV’s M*A*S*H: The Ultimate Guide Book, Gene Reynolds reveals that during filming “the actors kind of took it over and did something different in shooting. I had to go into the editing room to bring the episode back to how I really wanted it.” He doesn’t explain exactly what the actors did during filming to take the episode away from his vision but I’m very curious.

One thing that apparently changed was the ending. I hesitate to bring this up because I haven’t read Jackie Cooper’s 1981 autobiography, in which the director relates how Alan Alda refused to shoot the script as written. From reading various posts to the alt.tv.mash Usenet group, it appears either the sniper was supposed to die in the original script OR the script contained a direct plea from the 4077th for the Army to send someone to kill the sniper OR a soldier arrives by helicopter and shoots the sniper OR Hawkeye was supposed to carry a gun when he goes out to treat the sniper.

Like I said, I don’t feel entirely comfortable discussing this when I don’t have Cooper’s book to reference, but I think it’s noteworthy enough I’m willing to go out on a limb here. If someone has a copy of Cooper’s autobiography handy, perhaps they can clear up the confusion.

In a March 2001 alt.tv.mash post, Larry Gelbart confirmed there was disagreement about the ending:

Alda did not refuse to do what was written. He took exception to the ending. He and I had a heated exchange – our first and last in my four yeras [sic] with the show. He showed up at my house that evening, having thought out a compromise. He was anxious to make the episode – and our relationship – work in the best possible way.

The compromise in question reportedly led to the soldier firing a machine gun from the helicopter and wounding the sniper. Personally, it seems unrealistic the sniper would’ve survived such an attack.

Radar gets insulted and doesn’t fill the nearly empty brandy bottle with “white brandy” from the still but later, during Hawkeye’s date, the bottle is at least half full.

Dennis Troy has an entire line of dialogue in this episode as the wounded ambulance driver. Roy Goldman, Kellye Nakahara, and Sheila Lauritsen all make uncredited appearances. If I’m not mistaken, Lauritsen can be seen asleep on the floor in Post-Op (cuddled up with an enlisted man) when Hawkeye wakes up Margaret. Later, during the helicopter attack, Lauritsen is shown peering out the window of an unidentified tent with two enlisted men, wearing civilian clothes.

12 Replies to “Episode Spotlight: The Sniper”