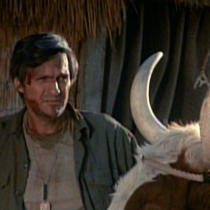 Capsule Summary: While returning from an aid station, Hawkeye gets in an accident and sustains a concussion. To stay awake, he talks to a Korean family until help arrives from the 4077th.

Those who despise the episode like to call it an ego trip on the part of Alan Alda. But he didn’t write the episode or come up with the idea for it. I’d like to think even those M*A*S*H fans who don’t like “Hawkeye” can admit it’s an interesting writing experiment from Larry Gelbart and Simon Munter and features an impressive performance from Alda. Personally, while I truly appreciate the experiment and the performance, I don’t think “Hawkeye” has much rewatchability. It’s an episode you watch once and don’t revisit for a decade or so.

In terms of story, there’s really not much to discuss. Hawkeye basically rambles for 20+ minutes. He discusses medical school, watching musicals in Boston, growing up in Maine, the wonder and mystery of babies, and the complex human thumb.

Not surprisingly, Hawkeye talks about women a lot: Lefty the waitress from Sol and Sol’s Delicatessen; Eloise McKay from the eighth grade; and strippers Ann Corio, Margie Hart, and Polly O’Day. Two were real-life burlesque dancers. Polly O’Day and her parrot were made up for the episode.

If I had to pick a favorite part of the episode, I’d probably go with Hawkeye’s ode to the human thumb. 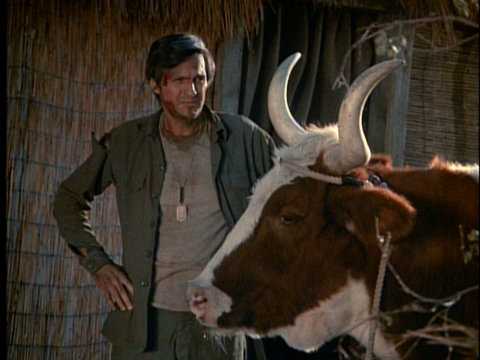 Hawkeye talks about movies with Margo the cow.

August 4th, 1999
The reason for doing it was because it represented a terrific writing and
acting challenge – and by Season 4, the challenges were getting tougher and tougher.

Yes, I was. And Alda was very helpful in terms of the script, as well.

January 19th, 2003
> I know you and Simon Muntner wrote this ep but I always wondered how much, if any, input Alda had here.

January 20th, 2003
>It’s a half hour Hawkeye fest. I don’t know of any other episode that features only one major character throughout. Had to be Alda’s idea.

But he contributed several bits and ideas to the script.

That’s what I meant when he some input in the show.

September 20th, 2003
> LG, what were you thinking with this one? Was it an experiment gone wrong?

Only for those who think that’s so. While there’s many an episode in the first four seasons that I think were complete or partial misses, l can’t say I feel that way about this one.

It’s not a question anyone being right or wrong here, it’s all a matter of personal taste – or distaste if that’s the case.

I’ll stop, before this becomes a one-man show, as well.

Jeff Osaka and Jayleen Sun (The Younger Children) have no other acting credits according to the Internet Movie Database but Sun later worked as stunt woman on several films between 1988 and 1995.

Hawkeye is the only main character to appear in this episode.