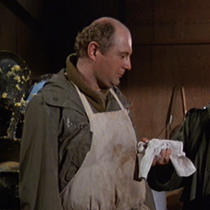 Capsule Summary: The 4077th celebrates Boxing Day by having the officers trade jobs with enlisted personnel.

This is an enjoyable episode. It’s fun seeing the main characters taken down a few notches. Only Father Mulcahy manages to enjoy himself and not complain. Colonel Potter is initially wary (“I’m a little gun shy of any tradition that hasn’t been done before.”) but soon embraces Boxing Day. He later comes to regret swapping places with Klinger once he realizes how much work is involved.

Charles, of course, is opposed to letting the “lower classes” get a sniff of the good life. Klinger makes Charles pay for his pretentious attitude by assigning him to work in the kitchen under head cook Sgt. Pernelli. At first, Charles almost relishes the opportunity to teach the cook about real food. That doesn’t last and Charles grows increasingly distraught as the episode unfolds.

A question for military experts: Would the head cook at a military establishment like the 4077th not only prepare the food but also clean all the dishes? Isn’t that something Igor and others on KP duty would usually do? Which means Margaret and B.J. should’ve been scrubbing pots and pans. We do see Margaret and B.J. hard at work lugging chicken wings outside while Igor plays cards with Pernelli.

Father Mulcahy and Hawkeye become orderlies. As mentioned earlier, Father Mulcahy is able to find joy in manual labor. The same can’t be said for Hawkeye, who cracks plenty of jokes.

Like Charles, Margaret isn’t thrilled with the idea of introducing Boxing Day to the 4077th. And she hates getting assigned to KP duty alongside B.J., who is quickly exhausted by all the work he has to do serving food. He tries to hide out in Post-Op but Igor finds him.

With limited time available, the episode can’t focus on everyone equally. Most of the focus is on the Colonel Potter/Klinger swap and the Charles/Pernelli swap, plus the medical emergency involving Slater. It’s too bad, because I would’ve liked to see more of Margaret and B.J. on KP duty. 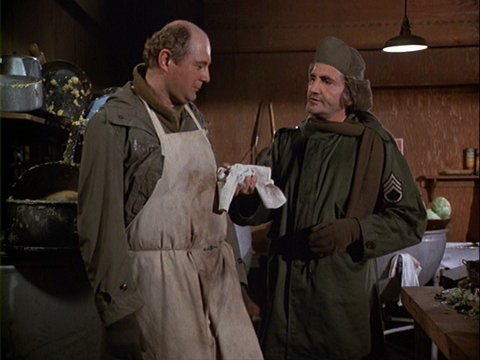 If I’m not mistaken, all Army nurses during the Korean War were officers. So why did Colonel-Corporal Klinger have Nurse Kellye switch places with Margaret? They’re both officers.

It’s very cold at the 4077th. During the opening scene, many of the nurses in the background are wearing colorful hats yet Charles isn’t wearing the toboggan cap he received in “Dear Sis” back in Season 7.

When Klinger is handing out Boxing Day assignments, Igor can be seen in the background but doesn’t say anything. There’s a nurse standing next to him who also has no lines. She looks like Jennifer Davis to me.

This was the second of three guest appearances by Val Bisoglio. He was credited simply as The Cook in “The Life You Save” during Season 9. When he returned in this episode, the writers gave his character a name. He played Sgt. Pernelli for the last time in “A Holy Mess” later during Season 10.

13 Replies to “Episode Spotlight: ‘Twas the Day After Christmas”