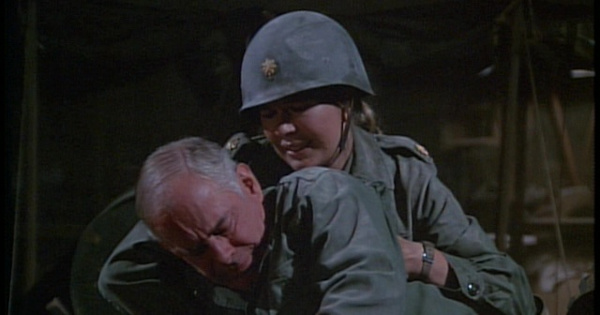 This is the third and last letter home episode from Season 4, after “Dear Mildred” and “Dear Peggy.” As is the case with most letter home episodes, viewers must willingly suspend their disbelief and accept that Radar has been told about events he didn’t personally witness (like B.J. and the watch).

There are some issues with Radar’s letter. I realize that by Season 4, his character had changed significantly, becoming far more innocent and naive. But his line about writing slow because his mother can’t read fast? That’s not innocent or naive or funny–that’s painful. Much better is the revelation that he used to blame his father for dying when he was young. Apparently, Radar eventually realized dying wasn’t his father’s idea. It’s believable and adds a little depth to the character, particularly given his relationships with Colonels Blake and Potter.

Radar sure gets around as he writes his letter. He starts off on his cot drinking Grape Nehi and eating pretzels, heads to the Mess Tent for some coffee, then sits at his desk with a bottle of Grape Nehi in front of him, and ends up back on his cot with few more pretzels. Let’s tackle everything he mentions in the letter in chronological order:

Hawkeye Pierce, Foot Inspector
This almost could’ve been a standalone B story in another episode. As is often the case, we only see Hawkeye inspecting members of the main cast rather than nurses or corpsman. At one point, Radar tells his mother there are 200 people in the 4077th, which equates to 20,000 toes. His math is off considerably here so perhaps he’s also wrong about the personnel count.

We see Hawkeye inspect just six pairs of feet and they all have stories to tell. Colonel Potter learned about foot care from Truman; Margaret tries to hide her rendezvous with Frank; Klinger hopes to convince President Eisenhower to grant him a discharge; Father Mulcahy has a scar on his foot, courtesy of his sister; and Frank’s toes are painted red.

B.J. and the Watch
Poor, naive B.J. I can’t figure out exactly how Sergeant Callan’s scam works. Where does he get watches without gears? Does he buy cheap watches in bulk and remove the gears himself? If so, are the gears of a cheap watch worth enough for him to spend the time removing them? We never learn if B.J. gets his money back.

The Hungry North Korean Soldier
This doesn’t ring true for me. Frank has enough experience with the South Korean military to know better than to tackle someone just because they’re speaking Korean. He’s not that stupid. I’m surprised he didn’t post MPs at the Mess Tent and ask for identification.

Colonel Potter’s Injury
Who exactly told Radar that Colonel Potter was killed? Margaret and Potter roll up in their jeep and a minute later Radar runs outside to see what’s going on. Did Klinger talk to Radar while running to get help? If so, why did he tell Radar that Colonel Potter was dead? Also, there seems to be quite a lot of blood on Potter’s pants. There’s no mention of a Purple Heart. Finally, are we supposed to assume that Potter was shot by the same North Korean sniper Radar encountered in the Mess Tent?

I think that’s it. Have I missed anything?

Frank’s obsession with whitewashing the rocks in camp is first shown in “The Trial of Henry Blake” during Season 2. Also, Frank has had his hand twisted at least once before, by Colonel Buzz Brighton in “The Ringbanger” during Season 1.

Does Radar’s makeshift fridge show up in any other episodes? He made it out of shipping crate intended for human blood. Likewise, is there always a bottle opener next to the door and I’ve just never seen it before?

What exactly is the point of Goldman saluting Hawkeye next to the Swamp? Hawkeye says “You better be prepared to explain that” and then Goldman walks past B.J. Am I missing something? Is it just another example of how little Hawkeye cares for Army discipline?