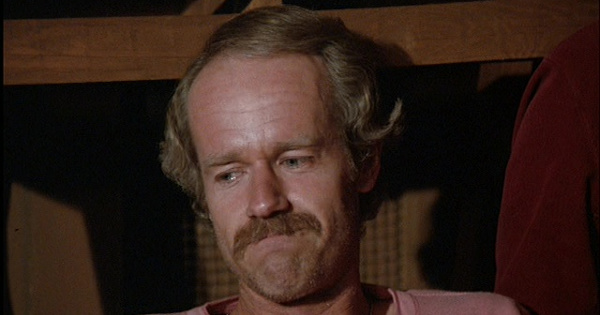 Capsule Summary: Klinger attempts to adjust to his new role as company clerk while B.J. grows increasingly upset about a letter he received from Peg.

There aren’t a lot of episode that can be considered sequels to earlier episodes. “Our Finest Hour” is a followup to “The Interview” while “Lend a Hand” is a followup to “The Consultant.” But “Period of Adjustment” is more than a followup. It picks up roughly two weeks after “Good-bye Radar, Part 2.” Off the top of my head, I can think of just one other example of a direct sequel: “Change of Command” takes place immediately after the events of “Welcome to Korea” during the changeover from Colonel Blake/Trapper to Colonel Potter/B.J. at the start of Season 4.

Like those two episodes, the two-part “Good-bye Radar” and “Period of Adjustment” were intended to address the departure of a character. In this case, it’s Radar. Rather than replace him, the writers decided to make Klinger the new company clerk. This episode sees him trying to fill Radar’s tiny yet also very big shoes and run the 4077th with the same efficiency. Only he can’t and everyone, with the exception of Father Mulcahy, Hawkeye, and B.J., keeps reminding him that he can’t.

It’s always nice when M*A*S*H remembers characters who’ve departed. “Period of Adjustment” includes references to all of the characters who left the series other than Frank. There’s plenty of talk about Radar, of course, but also Colonel Blake and Trapper.

You can’t discuss “Period of Adjustment” without addressing B.J. falling apart in Colonel Potter’s office. It starts out okay. Actually, it starts out with B.J.’s hilarious “You wore your soldier hat!” when Hawkeye walks in. But then things get serious and depressing and painful.

I know there are some fans who hate this scene, who can’t stand the way B.J. sobs and growls through his pain. Others love it and think it’s a poignant display of a father’s love. There’s a line–perhaps not always a fine one–between believable emotion and melodramatic hysteria. It’s possible Mike Farrell crossed that line in this scene. It’s also possible very few watching have been in B.J.’s shoes and therefore can’t begin to understand the depths of his anguish.

If the sobbing scene is too much for you, what about B.J.’s meltdown in the Swamp?

B.J.: “I mean, I’m sorry if it annoys you but I have this strange aversion to being away from my family. I miss them.”
Hawkeye: “It’s the same for all of us. You don’t think I miss my father?”
B.J.: “You really think that’s the same? Come on, Hawkeye! How old is your father? How old?”
Hawkeye: “Sixty-two.”
B.J.: “Sixty-two. How old was he when you saw him last, 60? 61?”
Hawkeye: “Something like that, yeah.”
B.J.: “Has he changed much? Was he walking and talking when you left? Erin wasn’t. But I hear she is now. Does your father remember what you look like? Will he know you when he sees ya? Is he calling anybody else ”Son”?”

Hawkeye: “Beej, I know how you feel.”
B.J.: “Yeah? Tell me how much you miss your kid.”
Hawkeye: “Okay, I don’t have a kid, and I don’t have a wife. But let me tell you something. Listen. I’ve been stuck in this sewer longer than you have and nobody wants out of here more than I do.”

I think this is a great scene that allows both B.J. and Hawkeye to vent a little bit. As it progresses, Hawkeye begins to get angry. B.J. isn’t the only one who misses home–he’s just usually the loudest about it. Hawkeye’s anger feeds into B.J.’s anger and suddenly B.J. is destroying the still and hitting Hawkeye in the face. Poor Hawkeye. Something similiar happened in “Mail Call” (Season 2) when Trapper got drunk and knocked Hawkeye aside with his bag as he tried to go AWOL.

As for Klinger, I think the best part of his story is Father Mulcahy’s talk with Colonel Potter about how long it took Radar to grow into the job of company clerk. Leave it to Father Mulcahy to be the voice of reason. It’s only fair for Colonel Potter and the entire 4077th to cut Klinger some slack and stop expecting him to be Radar. Nobody expected Colonel Potter to be Colonel Blake. As he reminds Klinger, everyone gave him the chance to make the job his own.

One last thing: There’s a slight disconnect between the Klinger who managed to find a generator when Radar couldn’t in “Good-bye Radar, Part 2” and the incompetent Klinger seen in “Period of Adjustment.” But it’s only a slight disconnect. Tracking down a generator is one thing. Knowing how and where and when to file dozens of reports is something else entirely. Two weeks doesn’t seem like enough time to figure that all out.

I love this line from Colonel Potter: “So far you’ve handled the job with all the efficiency of a one-legged man at a butt-kicking contest!”

When Charles is warning Hawkeye about how drunk B.J. is (“If I were his liver, I would sue for separate maintenance”) it’s almost feels like Charles is worried about another human being. Watch his face closely: he goes from glib to concerned.

Who drew the picture of Radar tacked to the dartboard for the “Vaccinate Radar” game? Klinger and B.J. were both really drunk. Also, I wonder if a member of the cast or crew took the picture home with them as a memento.

This is one of multiple Season 8 episodes with “Also Starring Gary Burghoff as Radar” in the opening credits.