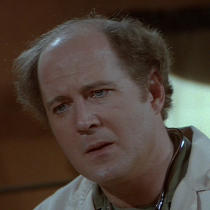 Capsule Summary: Hawkeye and B.J. are made morale officers; Charles saves a soldier’s leg at the cost of limited mobility in one arm, then learns the soldier is a concert pianist.

Half of this episode is forgettable at best, painful to watch at worst. Hawkeye and B.J. are too childish, Colonel Potter is too angry, Klinger is too eager, and the entire camp is too demanding. The idea of Hawkeye and B.J. being forced to serve as morale officers isn’t a bad one. The way it plays out, however, is too exaggerated, too absurd, too silly.

Everyone chanting “Kill the cook!” in the Mess Tent? Really? That’s not funny, that’s stupid. I do enjoy Igor’s rant about not being responsible for the food. I’m guessing Jeff Maxwell was really excited when he got the script for this episode and learned he had a long speech.

If only Hawkeye had remembered the amazing ribs he had shipped from Chicago in “Adam’s Ribs” during Season 3. Bring in boxes of ribs and tubs of sauce and have a barbecue–much easier than trying to put together a beach party. It’s too bad the party scene had to be shot on the Stage 9 sound stage rather than at the Fox Ranch. The cramped party doesn’t look like much fun.

Fortunately, “Morale Victory” also features a wonderful Charles storyline. Does it strain credulity that out of all the surgeons in Korea, Charles is the one who operates on a concert pianist? I suppose but I can let it slide. I’ve said it before and I’ll say it again: the longer I’m a M*A*S*H fan, the more I come to appreciate David Ogden Stiers.

Once again, he does fine work here, from the expression on his face when Charles learns that Private Sheridan is a concert pianist to his conversation with Father Mulcahy to the way he opens up to Sheridan in the Officers’ Club about wanting to play music:

Charles: “Don’t you see? Your hand may be stilled but your gift cannot be silenced if you refuse to let it be.”
Sheridan: “Gift? You keep talking about this damn gift. I had a gift, and I exchanged it for some mortar fragments, remember?”
Charles: “Wrong. Because the gift does not lie in your hands. I have hands, David. Hands that can make a scalpel sing. More than anything in my life I wanted to play but I do not have the gift. I can play the notes but I cannot make the music. You’ve performed Liszt, Rachmaninoff, Chopin. Even if you never do so again, you’ve already known a joy that I will never know as long as I live. Because the true gift is in your head and in your heart and in your soul. Now, you can shut it off forever or you can find new ways to share your gift with the world–through the baton, the classroom, the pen. As to these works they’re for you because you and the piano will always be as one.”

The speech resonates with anyone–myself included–who has always dreamed of being able to play an instrument, to truly play it. I took piano lessons when I was a kid. I can “play” the piano. I can “play” recognizable songs. But like Charles, I cannot make the music. 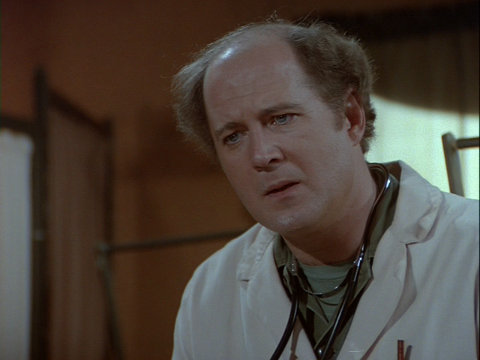 Charles learns that Private Sheridan is a concert pianist.

You can learn more about Paul Wittgenstein at Wikipedia as well as a lengthy article in Limelight magazine from 2014. Here‘s a YouTube video with audio of Wittgenstein playing Ravel’s “The Piano Concerto for the Left Hand in D major,” the piece Private Sheridan plays.

With the exception of the first notes, we never see Sheridan actually playing the piano. Careful camerawork, including closeups of a robed arm tickling the ivories, makes it look like actor James Stephens is playing. I wonder who that arm belongs to.

The 100-10 Field Service Regulatiosn manual is real. You can find the November 1943 version at the Internet Archive.