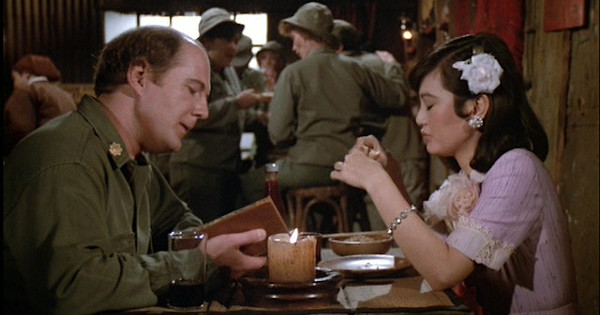 NOTE: I apologize for the delay in posting this Episode Spotlight. I accidentally scheduled it to be published later this evening rather than at 9AM as usual and didn’t catch the mistake until right now.

Capsule Summary: B.J. worries about a patient, Charles spends time with a working girl, and Klinger falls for a nurse.

I was probably in middle school when I first saw this episode on FX back in the late 1990s. I wonder if I knew what a working girl was back then or if I thought Sooni was just rough around the edges. “I don’t like this dress,” she says to Charles. “With all these buttons, it take forever to get out of it.” Later, in the mess tent: “When are we gonna have a few laughs? “I’m getting bored.” Did jokes like these go over my head at 13? I honestly don’t remember how worldly I was at that age.

Adults watching the episode when it originally aired certainly understood the odd relationship between Charles and Sooni. Most probably made the connection to Pygmalion or My Fair Lady as well, with Charles in the Henry Higgons role and Sooni as Eliza Doolittle. Of course, things don’t work out for Charles, whose attempts to enrich Sooni and turn her into a high-class broad just don’t work.

I have no trouble believing that Charles gets lonely. I have a hard time believing he could ever be lonely enough to approach Sooni.

In the B story, poor Klinger falls in love with Debbie Clark, a nurse from the 8063rd. He’s thinking forever but she’s only interested in right now. Klinger doesn’t want a fling and the two part ways. It’s unclear how much time passes during the episode but it feels like only a few days rather than weeks. That’s not a lot of time to fall for someone.

Finally, there’s the C story. It’s a weak one. B.J. and Hawkeye annoy one another to such an extent that Hawkeye moves out of the Swamp. Hawkeye claims B.J. is obsessing about a patient; B.J. says Hawkeye is obsessive about everything from brushing his teeth to sniffing his food. B.J. also thinks Hawkeye is too competitive.

This was the first of five episodes directed by Mike Farrell.

Charles has some good lines in this episode. Two of my favorites are “Shut up, Beethoven, you hack!” and “Max, you are a gentleman and a lady.”

Radar does not appear in this episode. He’s away on R and R. His absence allows Hawkeye to move into company clerk’s office to get away from B.J.