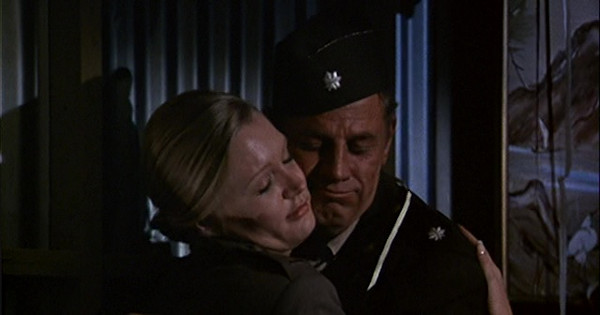 Capsule Summary: After Hawkeye and Trapper treat his son, General Mitchell gives the 4077th an Officers Club, leading to resentment from the enlisted men.

Here’s a rare episode of M*A*S*H that actually had an impact on later episodes and changed things for the characters. The introduction of the Officers’ Club expanded the universe of the 4077th, giving the writers a new, exciting location to write about. In order to make the club accessible to every character, however, it had to be opened up to the enlisted men. Hence the storyline of this episode.

Unfortunately, “Officers Only” isn’t a very strong episode. More than ten minutes go by before the club makes its first appearance. That’s a huge chunk of the episode. These first ten minutes are weak, in my opinion, little more than a series of character moments: Radar is afraid to wake Hawkeye, Frank wants to get in on an important surgery, Hawkeye is sarcastic to everyone, Henry makes a fool of himself in front of General Mitchell, etc.

Once Hawkeye and Trapper return from their three days (and nights) in Tokyo, things start to pick up. They’re stunned to see the Officers’ Club in the compound and, after realizing Radar and the other enlisted men are angry about being kept out of the club, decide to do something about it. It all works out in the end, of course, and the enlisted men are invited into the Officers’ Club as “relatives” of Hawkeye.

But even the last half of the episode isn’t particularly memorable. Maybe it’s just me.

There’s a very minor storyline in which Henry pursues Nurse Watson (played by Sheila Lauritsen) that eats up perhaps two minutes of the episode. I’m a fan of Lauritsen, so I don’t mind, but it adds nothing to the episode. Perhaps there was more in the script that either wasn’t filmed or had to be cut during editing.

This was the third and last episode to guest star Robert F. Simon as General Mitchell. His previous appearances were in “The Trial of Henry Blake” and “The Incubator.”

General Mitchell’s aide is played by Ralph Grosh, who also played his aide in “The Trial of Henry Blake.” The closing credits incorrectly call him Capt.’s Aide.

Henry apparently enjoys reading nurse romance novels. He’s seen clutching Special Nurse by Lucy Agnes Hancock when Radar comes into his tent to tell him about Hawkeye and Trapper bobbing for customers at the Fujikowa bathhouse in Tokyo.

6 Replies to “Episode Spotlight: Officers Only”