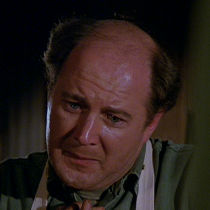 Capsule Summary: Charles does some soul searching after realizing he was nearly killed by a sniper. Meanwhile, Hawkeye must oversee the mess tent while B.J. deals with the camp’s laundry.

Like so many episodes, “The Life You Save” attempted to pair a serious story line with a comedic one. Unfortunately, the serious story line is so serious that it overpowers the comedic story line. It’s jarring to go from listening to Charles talk about the death of his little brother to Hawkeye worrying about missing mess tent trays.

I’ve said time and time again how I’ve come to appreciate both the character of Charles and the talent of David Ogden Stiers more and more over the years. This episode is yet another example of how superbly Stiers portrayed Charles. His obsession with discovering what happens to someone when they die could easily have felt forced or exaggerated. Stiers was able to play the scenes as a profound exploration of humanity and a struggle for understanding rather than mushy melodrama.

The highlight of the episode has to be the battalion aid scene. Charles tells the surgeon he doesn’t know why he came. His conversation with Colonel Potter on the phone takes a dark turn at the end:

Later, when a wounded soldier dies, Charles desperately asks him to explain what he’s going through. “Please, I have to know,” he begs. “What is happening to you?” All the soldier says is “I smell bread.” Then he dies. Before heading back to the 4077th, Charles leaves his cap behind. Is it a signal that he’s come to terms with not knowing the truth about death? Or just that he knows he has to move on and not dwell on the unknown.

It’s interesting that Charles never talks to Hawkeye about what he’s going through. B.J. is cruel when he confronts Charles in post-op and Margaret almost worse in the Officers’ Club. Colonel Potter at least seems to understand the what Charles was feeling (he called it the “heebie jeebies”). Perhaps Hawkeye would’ve been able to empathize or at least sympathize with Charles.

The B story involving the additional duty assignments was harmless. M*A*S*H occasionally had episodes like this one that involved the officers being given other duties at the 4077th. We’re supposed to assume they always had other jobs to do–garbage supervisor, morale booster–but most of the time the series ignored this aspect of military life. The same can be said for officer of the day, something that only came up a handful of times throughout the series.

The problem is that only Hawkeye’s assignment is given any depth. We see almost nothing of B.J. tackling the laundry, Margaret trying to boost morale, Charles overseeing the motor pool, or Father Mulcahy being in charge of garbage. This easily could’ve been expanded to fill an entire episode.

Finally, am I the only one who wishes more had been done with Gwen’s bullet wound? Not only do we not see her get shot but other than a few seconds of Hawkeye examining her, we don’t see anything at all. 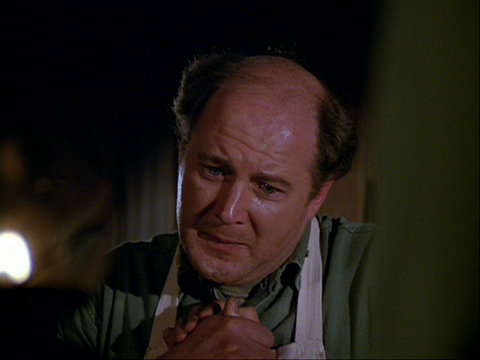 “The Life You Save” was originally scheduled to air on Monday, March 30th, 1981. But CBS decided to pull the episode due to an attempted assassination of President Reagan earlier that day. The network aired a repeat of “Cementing Relationships” instead. “The Life You Save” finally aired six weeks but not before three weeks of summer repeats.

I don’t believe Charles ever mentions his dead brother again after this episode.

We get a pretty good look at cap Charles was wearing during the sniper attack and the bullet holes in it. I’m surprised he wasn’t at least winged by the bullet. It’s a tight fighting cap but maybe the bullet slid by his bald spot.

I’d love to hear how the prop department built the wall of garbage Father Mulcahy was fighting to contain.

There are an impressive 14 guest stars in this episode. Is that a record?

11 Replies to “Episode Spotlight: The Life You Save”