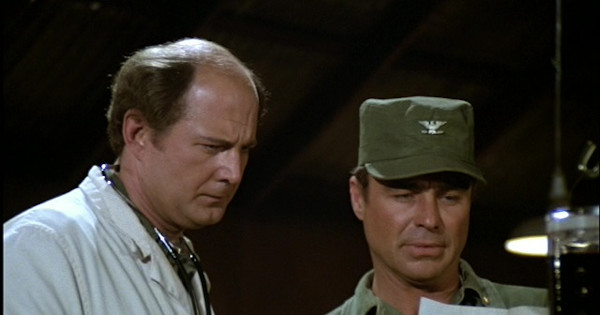 Capsule Summary: Hawkeye treats a wounded North Korean soldier, prompting outrage from a G.I. and a visit from Colonel Flagg.

This was the last episode of M*A*S*H to feature Colonel Flagg, although the character later resurfaced in an episode of AfterMASH. Edward Winter made six appearances as Flagg between 1973 and 1976 (five if you don’t count “Deal Me Out” when he was credited as Captain Halloran).

Why the big gap between this episode and “The Abduction of Margaret Houlihan” back in Season 5? And why was this Flagg’s last appearance? I don’t know for sure but presumably the writers felt the character had run its course. It may have been for the best. Edward Winter did a fantastic job as Flagg but there were only so many ways to get the character to the 4077th and only so many things for him to do once he was there.

Indeed, Flagg’s role in this episode is basically the same as in many of his previous appearances: he’s convinced someone at the 4077th is a Communist. What makes “Rally Round the Flagg, Boys” stand out is not necessarily Flagg but the interaction between Flagg and Charles. But the two meeting, Flagg trying to convince Charles to spy on Hawkeye, and Charles ultimately refusing to do so could happen just once.

Were there ways to bring Flagg back to the 4077th later in the series? I’m sure the writers could’ve come up with something if they really wanted to but it likely would’ve felt repetitive. This was a strong episode for the character to go out on, in my opinion. Flagg did his homework before meeting Charles. He knew exactly what to say to frighten and entice Charles into working with him.

Of course Charles would jump at the chance to not only get away from the 4077th but out of Korea entirely. But even Charles wasn’t selfish enough to go along with Flagg for long. He masterfully turned the tables and pulled one over on Flagg. Even Hawkeye was impressed.

Speaking of Hawkeye, his storyline is a little disappointing. It ties into the Charles/Flagg storyline in that both involve the wounded North Korean soldier. But it just ends. Hawkeye decides to operate on the wounded North Korean soldier and feels justified in that decision. He gets really upset in the O.R. when Basgall won’t stop yelling at him. Later, Hawkeye feels bad about yelling at Basgall but B.J. refuses to let him apologize. Basgall then confronts Hawkeye in the Swamp, forcing B.J. to get a little rough.

Then what happens? We don’t know. Basgall is sent back to Post-Op and that’s the last we see of him. Hawkeye never gets to apologize or reflect on the experience. In the tag scene, B.J. visits Father Mulcahy to get a boxing lesson, wanting a way to blow off steam so he doesn’t rough up any other patients. But what about Hawkeye?

I wonder how many times Goldman tossing his lunch in the garbage had to be shot. There’s no jump cut so presumably Edward Winter really was in the garbage can and really did get a a tray full of food thrown at him.

When Colonel Flagg turns out the light in the Swamp, there’s a momentary freeze frame while the tent is dark and Flagg makes his escape.

Can anyone identify the magazine Charles finds in Hawkeye’s footlocker? From what we see of the cover it looks like it’s called FUN. Was it a real magazine or something the prop department came up with?

Every single guest star in this episode made at least one other appearance on M*A*S*H.

Margaret makes an appearance in the O.R. scene that somehow I completely missed. Thanks to Doc Funnypants for pointing it out.

8 Replies to “Episode Spotlight: Rally Round the Flagg, Boys”