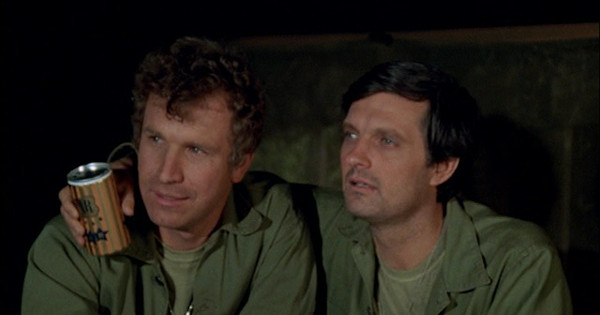 I have only one complaint about this episode and it really doesn’t have anything to do with the episode itself. “Ceasefire” was the final episode to guest star Marcia Strassman as Margie Cutler. Margie was my favorite recurring character from Season 1 and also my favorite nurse featured on M*A*S*H. I can’t say I’m particularly fond of her haircut in this episode but that’s beside the point. I’ve always wondered why Strassman didn’t return in Season 2. The simplest explanation is that the writers didn’t want a recurring love interest for Hawkeye.

Actually, I have one other criticism. It’s painfully obvious the entire episode was filmed on the Stage 9 sound stage and not outside at the Fox Ranch. Unfortunately, the script called for numerous shots of people celebrating outside. Because filming was restricted to the sound stage, the parade circling the Swamp looks very cramped–almost comical, in fact.

As with most episodes, if we look too closely at “Ceasefire” it’s pretty easy to find things to pick at. For example, is it believable that out of everyone at the 4077th, Trapper is the only one to exhibit any skepticism about the ceasefire? Likewise, what are the odds casualties would arrive seconds after General Clayton announced there was no ceasefire? Finally, how did Hawkeye manage to get all those pictures of Margaret and General Clayton? The two are clearly posing for the camera.

There’s quite a lot going on in the episode. I like Trapper’s storyline the best. Unwilling to celebrate the ceasefire because he’s convinced it either won’t happen or won’t last, he offers a nice counterpoint to Hawkeye and the rest of the camp. Thanks to some fine work from Wayne Rogers, Trapper doesn’t come across as a killjoy or a whiner. He’s a realist resigned to the fact that ceasefires don’t mean anything until they actually happen.

Hawkeye’s romance storyline is a little too silly. I don’t think we really got the impression earlier in Season 1 that he was in serious relationships with multiple nurses. I suppose one nurse could’ve gotten the mistaken impression the two had a future together after the war. But three?

I like the idea of Radar wanting a scrapbook but the execution falls a little flat. He’s insulted by the notes Trapper and Hawkeye leave but loves the one Colonel Blake leaves. That’s a nice moment ruined by an awkward scene in which Radar more or less begs Colonel Blake to keep in touch once they’re both back in the States. For whatever reason, Blake doesn’t want to but Radar keeps asking.

Either I hadn’t seen this episode in so long I’d forgotten parts of it or the scene in which Margaret sticks her head in the stove was cut in syndication because I didn’t remember it at all. The Margaret/Frank storyline is fine but it’s too bad they’re cut off from the rest of the camp.

Klinger selling his dresses is harmless filler. I’m surprised Colonel Blake doesn’t get his own storyline. He’s involved in setting up the ceasefire plot and Radar’s storyline. His speech about returning home and enjoying everything about civilian life is a good one. Father Mulcahy’s impromptu speech standing in the jeep is nice, too.

This episode aired less than two months after the Paris Peace Accords were signed to end the Vietnam War. The timing was purely coincidental, explained Larry Gelbart in a July 2001 post to the alt.tv.mash newsgroup:

Pure coincidence. The newspaper headlines the day we sat down with the cast to read the script all said: “Ceasefire.”

When someone asked in in June 2004 why M*A*S*H had an episode about a false ceasefire, Larry Gelbart replied “Because all REAL wars have false ceasfires [sic].”

Finally, Gelbart confirmed in February 2008 that “Ceasefire” was not written with the expectation that it might be used as a series finale due to low ratings.

Is it Hawkeye who pours beer on Trapper while everyone sings “Auld Lang Syne” or are we watching Alan Alda pour beer on Wayne Rogers? Watch closely and you can see Rogers say something and then he and Alda start laughing.

This was the last episode to feature Patrick Adiarte as Ho-Jon. Also, although Lynnette Mettey later played three different nurses in three different episodes, “Ceasefire” was the final episode in which she played Lt. Nancy Griffin.

The Internet Movie Database claims that Bonnie Jones makes an uncredited appearance in “Dear Mildred” but I don’t think that’s true. So “Ceasefire” is her last episode as well.

Odessa Cleveland gets a credit for this episode and Ginger is in the O.R. scene at the beginning but unless I missed it she doesn’t say anything. Perhaps a line was cut?