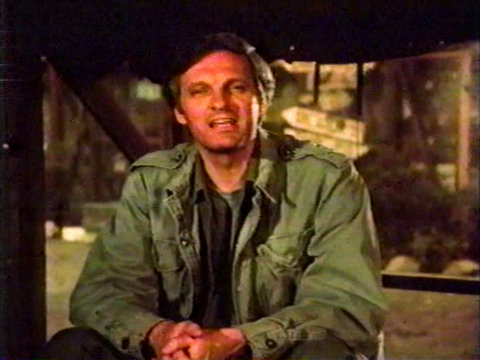 Here’s a 15-second generic promotional spot for M*A*S*H that aired in May 1986 on WTXX-TV (Channel 20) in Connecticut. I’m sorry about the quality. The tape I found it on is in rough shape.

It’s hard to be sure but after listening to this spot closely I’m pretty sure it was edited down from a 30-second spot, likely because WTXX-TV wanted a shorter spot to use during commercial breaks. There’s an abrupt cut in the audio around eight seconds in. Or perhaps the spot was poorly edited by 20th Century Fox before it was sent to stations.

I believe that’s how promos like this were typically distributed. Fox produced various spots and shipped them to local stations across the country. Each station would then “tag” the end of the spots with their custom graphics and voiceovers.

There’s no way to know when the two seconds of Alan Alda telling viewers to “Join me and the medics of M*A*S*H” was filmed. It was probably 1982.

This is another promotional spot that was originally part of my M*A*S*H In Syndication article. I’ve moved it to the blog in the hope that more people will see it.

One Reply to “Generic Promo with Alan Alda (Syndication)”