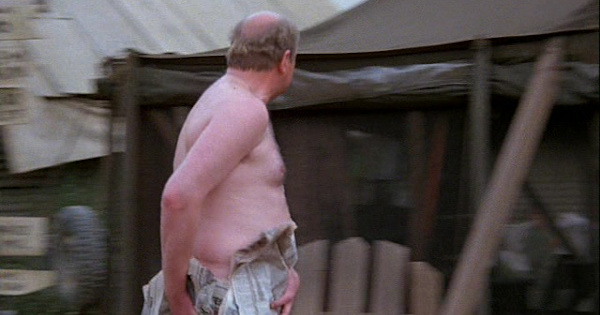 There’s nothing wrong with Charles and his newspaper story line but maybe it should have been relegated to the B story in order to give Hawkeye’s darker story line more time to unfold. On the other hand, expanding Hawkeye’s story line may have undercut its effectiveness. Perhaps the tale of two brothers opposite sides of the war, unable to speak to one but desperate to do so, works precisely because it is concise and not dragged out. Alan Alda directed “Communication Breakdown” which could explain why Hawkeye has such a small role in the episode.

Would a newspaper shortage really drive everyone at the 4077th so crazy? Perhaps. It’s believable enough, I suppose, although presumably the camp got a lot of its news over the radio. I don’t know how long it took to get mail from the United States to Korea but those newspapers must have been out of date to some degree.

Father Mulcahy stumbling upon one of the newspapers in the Swamp is a little too contrived for me. For one thing, he should’ve been helping out in surgery or in Post-Op, right? For another, I doubt he would’ve walked into the Swamp without asking.

When the camp swarms Charles after the newspaper is discovered, Igor yells “Hey, give me the classifieds, I need a job!” I don’t know why but I find that hilarious. Someone else calls out “Let me see Louella Parsons!” She was a pioneering gossip columnist specializing in Hollywood news. Colonel Potter, of course, is only interested in the L’il Abner comic strip.

Who knew Charles was so spoiler-phobic? How else do you explain his insistence on reading every page of each newspaper before handing it off to the general public? He wants to learn the news and read the editorials without anyone ruining them for him.

I’m just going to come out and say this: It really looks like David Ogden Stiers is naked under those newspapers.

This episode features a jazzier version of the opening credits. Although I like the way it sounds I’m not sure it particularly fits M*A*S*H.

According to the closed captions, these are the names Klinger calls out while distributing mail: Papazian, Mercer, Foytack, Margolese, Moran, and Yarborough. Perhaps these were all people involved somehow in the production of the series?

If the Internet Movie Database is accurate, Abigail Nelson–who portrays an unnamed nurse in this episode–has only one other acting credit to her name: a 1959 episode of Mr. Lucky.

The brief exchange between Kellye and Charles is amusing. I don’t recall any other episodes that involved subtitles on screen. Does anyone know if she is A) actually speaking Japanese, and B) actually saying “Boy, you look ridiculous”?

Byron Chung made his sixth appearance on M*A*S*H in this episode, James Saito his third.