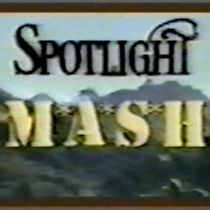 Long-running TV newsmagazine Entertainment Tonight has been on the air since September 1981, syndicated to local stations across the country. The night of the M*A*S*H series finale–Monday, February 28th, 1983–it featured a five-minute spotlight touching upon the “past, present and future” of the series.

Hosts Ron Hendren and Mary Hart took a look at a M*A*S*H finale parties in Cleveland, OH where Larry Linville was the guest of honor and asked viewers via a telephone poll whether or not CBS should do a M*A*S*H sequel.

The results of the poll are unknown. The bulk of the spotlight consists of a montage of images from M*A*S*H cut together with footage from a press conference about the finale. It’ set to the version of “Suicide is Painless” from the film MASH with lyrics.

I’ve had video of this spotlight available since 2004 but not a lot of people have watched it. Over the past five months, it’s been viewed just 32 times. So I decided to shift it from the Features section of the website to the blog where I’m hopeful it will reach a larger audience. For the record, I’ve transferred the single comment left at the feature to this post.