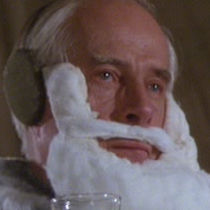 Capsule Summary: An entire year passes for the 4077th: Hawkeye and B.J. try to build an artificial kidney machine; Margaret takes up knitting; Charles gets in over his head betting on baseball; and Father Mulcahy becomes a farmer.

There’s no way to reconcile “A War for All Seasons” with the admittedly convoluted timeline of M*A*S*H. It simply can’t be done. That doesn’t mean it isn’t fun to try. It’s just easier to ignore the timeline entirely and consider this a standalone episode that exists on its own, unconnected to the rest of the series.

It’s not like the homemade kidney machine was ever seen again, despite Hawkeye and B.J. spending months working on it. Nor do we ever see Margaret knitting after this episode. Father Mulcahy’s garden disappears entirely. The Sears catalog, seemingly so important to the 4077th here, likewise doesn’t make another appearance.

If I had to pick a favorite storyline, I’d probably go with Hawkeye and B.J. building their kidney machine even though its more serious than any of the other storylines. It’s also vaguely reminiscent of how Colonel Potter was able to put together a Wangensteen suction in “Good-Bye, Radar (Part 1)” during Season 8.

The Charles storyline also feels somewhat familiar or at least it reminded me of Frank betting on baseball in “Out of Sight, Out of Mind” during Season 5. I’m conflicted about whether or not Charles would demean himself by listening to baseball, even if he thought he could make some cabbage (or coleslaw or garbanzos).

It’s a little disappointing that we don’t get to see Charles confront Klinger. Of course, few of the storylines get a solid ending. That’s the whole point of the episode. The year might end for the 4077th but the war doesn’t. It just keeps going.

That said, Margaret’s storyline does conclude pretty definitively, unless she’s planning on continuing to work on her potholder-turned-scarf-turned-blanket. Also, Father Mulcahy’s garden was a success and stands ready to be revived in the spring.

Although “A War for All Seasons” is mostly a silly episode, the second New Years Party is actually quite depressing. Nobody at the 4077th expected to still be in Korea in 1952. It’s not much of a celebration and Colonel Potter nearly breaks down while delivering his famous line for the second time:

Hear ye, hear ye. Here’s to the New Year. May she be a damn sight better than the old one. And may we all be home before she’s over.

In my opinion, Hawkeye and B.J. walking out of the Mess Tent and past Father Mulcahy’s dead garden would have been a much better way to end the episode. On the other hand, everyone sitting down to watch filmed highlights of the past year shows that life goes on. I hate Charles attacking the movie screen with a knife during the tag. That’s too wacky and crazy for Charles. It does provide a jarring end to a bizarre episode, however. 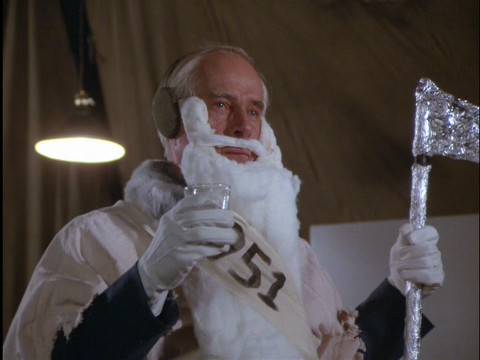 The game-winning home run that cost Charles so much money (known as the “Shot Heard ‘Round the World”) was hit by Bobby Thomson of the New York Giants during the final playoff game to decide the winner of the National League pennant. The game was played in New York City on October 3rd, 1951. The game really was carried on Armed Forces Radio for the benefit of military personnel in Korea. The broadcast heard in this episode is fake, however, and seems to be based on the famous Russ Hodges call over WMCA-AM radio in New York City. Perhaps some baseball or military experts can specify which radio broadcast would have been carried over Armed Forces Radio.

It’s not believable at all that the Army would allow the 4077th to shoot off fireworks–or that Colonel Potter would even think about doing it.

Speaking of fireworks, watch closely during the 4th of July party and you’ll see Charles lurking the background while Colonel Potter, Klinger, Hawkeye, and B.J. are placing their bets. With all that noise, it’s impressive he was able to overhear their conversation.

25 Replies to “Episode Spotlight: A War for All Seasons”