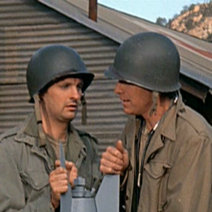 Capsule Summary: Hawkeye and Trapper risk their lives to defuse an unexploded bomb in the compound.

There’s really just the one storyline in this episode: the bomb that went thud when it should have gone boom. I’m not sure the Army-Navy game is substantial enough to be considered as a separate storyline. Once the bomb lands, the Army-Navy game unfolds primarily through characters outside the 4077th, used to paint the military as callous and unconcerned with the danger facing the camp.

Both Colonel Hersh and Commander Sturner seem to care more about listening to the game than helping the 4077th, although Sturner does eventually come through with instructions to defuse the bomb. Hersh asking Hawkeye to call during half time is absurd. So is his line, “If I don’t hear from you, I’ll understand.” It’s a grim thing to say.

About midway through the episode, we’re shown snapshots of characters reacting to the possibility that they might shortly be blown up. Klinger puts on a nice suit so he won’t be die wearing a dress; Margaret and Frank lament not meeting in another time or another place; Colonel Blake tells Radar the story of Tanker Washington; Radar gets up the courage to ask Nurse Hardy to accompany him to the supply tent; and Hawkeye, Trapper, and Ugly John enjoy a poker game.

I don’t remember seeing the scene in which Klinger talks to Father Mulcahy while wearing his fancy suit, so I suspect it was cut in syndication. I can understand why it was cut; it doesn’t add much and cutting it doesn’t really affect the rest of the episode. But it does provide some insight into the character of Klinger.

Given how brave she thought he was during the initial bombardment, it’s too bad Margaret never found out that Frank passed out from fear when he picked the short match. Speaking of Margaret and Frank, why were they in the “bunker” alongside Colonel Blake and Radar while the bomb was defused? They should have been taking care of the patients.

One last thought: if I were in their shoes, I wouldn’t have stopped running the way Hawkeye and Trapper did. They barely put any distance between themselves and the bomb when they hit the dirt. 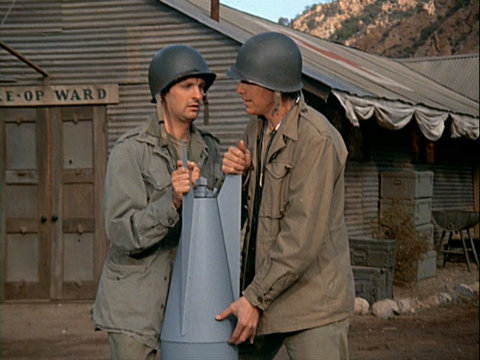 Hawkeye and Trapper perform delicate surgery on the bomb.

McClean Stevenson provided the story for this episode, making him the second member of the cast after Alan Alda to contribute to the creation of an episode.

Watch closely while Hawkeye, Trapper, and the two nurses are dancing around Colonel Blake’s office. Bobbie Mitchell, the brunette nurse, clearly smacks Alan Alda in the face with her pom-pom.

This episode features some unusual music choices starting with the opening theme. It’s cheery and light and was also used in “Sticky Wicket” and “Major Fred C. Dobbs.” Also, the music playing while Hawkeye and Trapper walk toward the bomb sound like something out of an episode of The Twilight Zone.

A hilarious outtake exists from this episode in which McLean Stevenson blows a line while telling the story of Tanker Washington.

Both Sheila Lauritsen and Bobbie Mitchell make their first credited appearances in this episode.