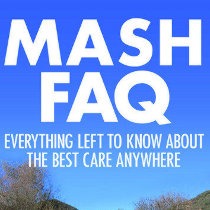 A new nonfiction book about the MASH franchise, including the TV show, is scheduled to be published on April 26th by Applause Theatre & Cinema Books, an imprint of Hal Leonard Performing Arts Publishing Group. Written by Dale Sherman, MASH FAQ: Everything Left to Know About the Best Care Anywhere runs more than 400 pages and covers the novel, the movie, the play, the TV show, its spin-offs, and more.

You should be able to buy MASH FAQ online and in stores starting next week. The suggested retail price is $19.99.

Here’s the lowdown on the unforgettable show about the Forgotten War. M*A*S*H began as a novel written by a surgeon who had been in a Mobile Army Surgical Hospital during the Korean War. After being rejected multiple times, the novel would go on to become a bestseller, leading to 14 sequels, an Oscar-winning movie that propelled its director and actors to stardom, and a multiple-Emmy-winning television series that lasted nearly four times the length of the war.

MASH FAQ looks at how the novel came to be, its follow-ups in literary form, the creation of the popular movie, and – most importantly – the television series that transformed comedy and television in the 1970s. Included are chapters on the top-20 pranks of M*A*S*H, the cast members’ careers before and after the television show, famous guest appearances, and movies shown in the mess hall.

Beyond the fiction, MASH FAQ also features a brief chapter to put the war into perspective for easy referral – and looks at what led to the Korean War, how such medical units functioned, and how M*A*S*H shaped our perception of the era.

An excerpt from MASH FAQ can be found here. Applause has published similiar books about Star Trek, Seinfeld, South Park, and Twin Peaks. And Dale Sherman has written other books in the Applause FAQ Series about about Quentin Tarantino and the rock band KISS.

I believe this is the most recent book to examine M*A*S*H since David Scott Diffrient’s book about M*A*S*H, published in September 2008 as part of the TV Milestones Series from the Wayne State University Press.

For the record, Dale Sherman and I exchanged a few e-mails last year while he was working on the book and I offered one or two suggestions that I hope were useful. Otherwise, I have no involvement or connection to MASH FAQ.