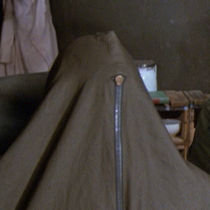 Capsule Summary: Hawkeye is in desperate need of a new pair of boots but everybody wants something before they’ll help him.

I love this episode. It’s definitely silly, and reminiscent of Season 1’s “The Long-John Flap,” but I still enjoy how Hawkeye and Trapper get caught up in an increasingly complex web of wheeling and dealing that ultimately falls apart in spectacular fashion. I’d forgotten exactly why the plan to get the boots collapsed, which made rewatching the episode much more fun.

Am I the only one who feels a little bit sorry for Frank? Hawkeye stuffing Frank’s wife’s birthday card into his boot is actually a pretty awful thing to do. It’s also tough to hear Frank discussing how sad his birthday parties were when he was a kid. He’s just self-aware enough to recognize that people don’t like him but seemingly incapable of understanding why. At his surprise birthday party, he seems genuinely excited. He says its the happiest night of his life and even calls Hawkeye and Trapper his buddies just before the whole thing falls apart.

Later, while arguing with Margaret about cutting his birthday cake, Frank seems so pathetic. He whines and Margaret tells him to act like man and calls him a twit. It’s sad.

I can’t decide what my favorite bit of dialogue is. Margaret calling Henry “Colonel DrunkyJohn” is hilarious. So is Nurse Murphy’s response to Radar: “Only if you plug yourself in and blow on my hair.” Perhaps nothing tops Trapper’s defense of Klinger, however:

Frank: “Never! You’re asking me to let a pervert out of the army?”
Hawkeye: “Oh, right, Frank. By all means, let’s keep the perverts in the army.”
Trapper: “Anyway, Klinger’s not a pervert.”
Margaret: “How do you know?”
Trapper: “Because I’m one and he’s never at the meetings.”

And who could forget Klinger’s “Hey, she’s tearing up my crazy papers!” 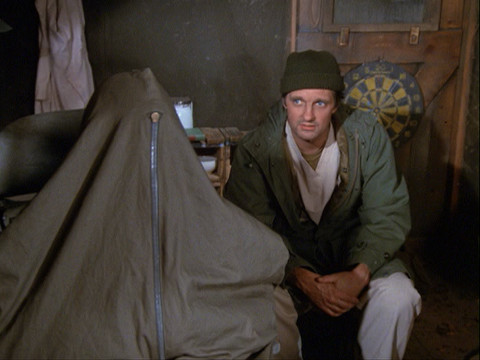 Trapper has zipped his fly to new heights.

Suzanne Zenor’s name in the closing credits is unusually prominent and I’m not sure why. She doesn’t have a very big role.

There are plenty of familiar faces in the background at Frank’s party: Jeff Maxwell, Kellye Nakahara, Roy Goldman, Dennis Troy, and Sheila Lauritsen.

Lauritsen has just one line in the episode–“Hawkeye, is that your hand?”–but that’s enough to earn her a credit for her appearance. “For Want of a Boot” marks her last credited appearance but she’s seen in at least one additional episode.

Johnny Haymer makes his first guest appearance as Sgt. Zale in this episode. It’s also the first credited appearance for Patricia Stevens, although I believe she’s in a few earlier episodes uncredited.

Father Mulcahy is not in this episode.

14 Replies to “Episode Spotlight: For Want of a Boot”