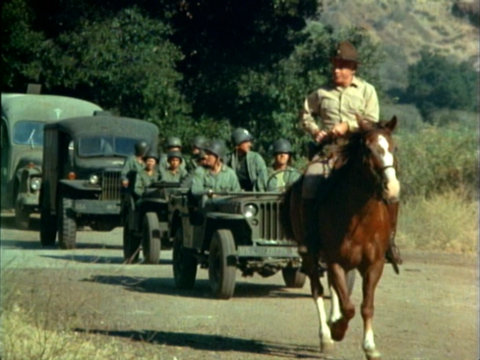 Capsule Summary: The 4077th is forced to bug out but Hawkeye, Margaret, and Radar stay behind to care for a wounded soldier who can’t be moved.

I decided to review an hour-long episode this week, however, and “Bug Out” was the episode randomly selected. It’s the second of five episodes that originally aired on CBS as hour-long specials and were later split in two for syndication. That’s how I originally saw the episode on FX back in the late 1990s or early 2000s.

I actually can’t remember whether or not I saw both parts of “Bug Out” on FX at the same time. It’s entirely possible that I saw Part 2 first and later caught Part 1. Perhaps I saw Part 1 first and then eventually managed to see Part 2. Or maybe I actually did see them both back-to-back.

While rewatching “Bug Out” on DVD, I noticed several scenes during the second half that didn’t seem as familiar as the rest of the episode. That suggests I may have seen Part 1 on FX more than I saw Part 2. Specifically, I don’t recall the lengthy scene involving the Korean women in the building and Klinger losing his entire collection of dresses. I’m guessing it was edited down for syndication.

Despite the fact that this is a double length episode, not all that much happens during “Bug Out.” I think a little too much time was spent on the bug out rumor rather than the bug out itself. It’s not until 14 minutes into the episode that the bug out starts. There’s a short but impressive sequence of tents being collapsed, equipment being loaded onto trucks, and patients being moved. I’d love to know more about how the scene was shot. Was it heavily choreographed? Were the tents collapsed more than once? The shot of the mess tent being collapsed involves at least a dozen people.

For all the work that went into the bug out, I’m curious exactly how the 4077th was supposed to set up a new camp when so much was left behind. From what I’ve read, real MASH units during the Korean War had to be able to break down and move out in just six hours. What did that mean? Did everything go? In “Bug Out,” we see the tents taken but none of the framing, the flags but not the flagpoles, the surgical tables from the OR but not the light fixtures. Of course, just because we don’t see truckloads of construction material and electrical equipment doesn’t mean it wasn’t there.

(I’d also like to know how far the camp moved. Are we supposed to believe that Klinger ran behind his dresses for miles pulling Pokey the goat?)

Most of the episode and the bug out is played for laughs, despite the seriousness of the situation. Hawkeye and Margaret discuss their fears of encountering the enemy, a glimpse at how their relationship will develop. Watch Margaret’s face while Hawkeye and Radar leave for Rosie’s. They’re joking. She looks terrified.

Both B.J. and Colonel Potter expressed concern about Hawkeye staying behind but nobody said anything about Margaret or Radar. It’s odd that Frank didn’t put up a fight about Margaret being in danger. Or Colonel Potter, for that matter. Did anyone other than Klinger even notice that Radar ran back to join Hawkeye and Margaret when the convoy left?

Also added to the opening credits starting with this episode was William Christopher.

Frances Fong played Rosie in this episode, taking over for Shizuko Hoshi who originated the role in “Mad Dogs and Servicemen” during Season 5. Fong returned in “Fallen Idol” during Season 6 before Eileen Saki took over as Rosie in “A Night at Rosie’s” during Season 7. Saki is also in “Bug Out,” credited as Korean Woman. She’s the madam who argues with Colonel Potter and B.J.

During the first scene, B.J. calls out to one of the men digging the latrine named Salkowitz. It looks to me like Jeff Maxwell nods in response. That means Igor had three different last names over the course of the series: Maxwell, Salkowitz, and Straminsky (which I believe was first used in “Depressing News” during Season 9).

Colonel Potter giving Margaret a ride on Sophie is a nice moment, even if they don’t go very far. Also, notice how Hawkeye ignores the jeep carrying B.J., Frank and Father Mulcahy in favor of a seat in the jeep filled with nurses.

29 Replies to “Episode Spotlight: Bug Out”