Capsule Summary: Hawkeye is on the hook for $22,000 after Klinger’s goat eats a bag filled with military scrip. Meanwhile, Charles gets himself into trouble trying to buy a valuable vase.

“That Darn Kid” is a sequel of sorts to “Payday” from Season 3, which saw Hawkeye serving as paymaster for the first time. In that episode, he was left with an extra $10 after paying everyone at the 4077th. While dealing with the paperwork to return the $10, he complained to Radar about all the money he was losing working for the Army rather than in civilian practice. Radar filled out a form and Hawkeye was paid $3,000, only for the Army demand the money back.

(The concept of Hawkeye being angry about lost wages was later revisited in “Back Pay” during Season 8.)

In this episode, Hawkeye is again tasked with serving as paymaster and ends up owing the Army $22,340 after Klinger’s goat eats the scrip. It’s more than a little absurd and probably would have worked better during the first three seasons when M*A*S*H was at its wackiest. I haven’t had much experience with goats so I’m not sure how believable it is that the goat would chew through Klinger’s footlocker to get to the tasty bag of money inside.

For once, it’s nice that nobody blamed Klinger for anything even though it was his goat and he was the one who put the money in the footlocker rather than ask Colonel Potter to open the safe. Hawkeye does yell at Klinger a little bit at first but that’s it. Klinger then helps Hawkeye and Colonel Potter blackmail Major Van Zandt. We never learn what happens to the goat nor do we see Klinger repaying Hawkeye and B.J. for the money they loaned him to buy the goat in the first place. Come to think of it, we never seen Klinger sell a single glass of goat milk.

The Charles B story is a decent one, mostly because it ties into the A story pretty well. Poor Charles thought one elective course in Oriental Art made him an expert. He sure paid for that mistake. If I’m doing my math correctly, he ultimately has to pay Rizzo $250: one day of interest from his supplemental pay, three days of interest once he gets his regular pay, and the initial $50 loan.

Rizzo’s role in this episode feels larger than Margaret, Father Mulcahy, and B.J. combined. B.J. has a bit to do at the start of the episode, loaning Klinger money and then trying to buy the vase from the farmer. He then basically disappears for the rest of the episode aside from a brief scene in surgery and the scene when he angrily throws everyone out of the Swamp. His anger is never explained. It’s also odd that B.J. isn’t involved in the scheme to save Hawkeye from having to repay the Army. 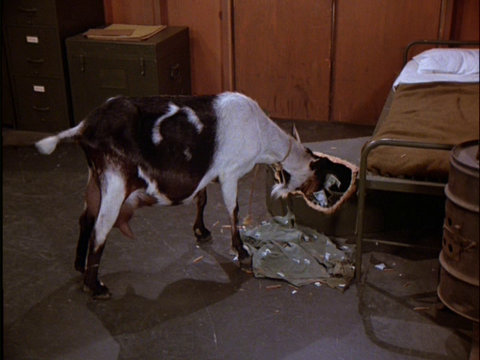 This was the second of two episodes directed by David Ogden Stiers. The first was “Identity Crisis” earlier in Season 10 (which was actually produced during Season 9).

Radar and his love of Grape Nehi is mentioned by Igor and Charles actually drinks Grape Nehi, albeit in a brandy snifter.

I think there’s a jarring cut during the opening scene. The farmer is wearing his hat when he pulls his cart in front of the Swamp and he is holding the cart handles with both hands. There’s a cut to a shot of the goat and then a cut to the farmer standing next to his cart without a hat.