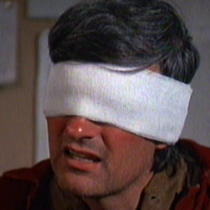 Capsule Summary: Hawkeye is blinded after trying to fix the stove in the nurses’ tent and may not recover his sight. Meanwhile, Frank sneakily bets on baseball games.

If you’ve never seen this episode, you could be forgiven for reading the brief summary and assuming it’s nothing more than a gimmick episode. Hawkeye goes blind? That sure sounds like a gimmick or, a contrived plot device intended to introduce tension that by necessity will be cleared up by the end of the episode. Is there anybody who watches “Out of Sight, Out of Mind” for the first time and actually worries Hawkeye may actually be blind for life? I doubt it.

Yet somehow it works. And it works well. Never does it actually feel like a gimmick. Yes, the stove exploding in Hawkeye’s face is a little contrived. Yes, we all know he’s going to make a full recovery. This isn’t an episode about a character being blinded or a character facing the prospect of a life without sight. It’s about a character learning what it’s like to be blind, even if it is just temporary.

With one or two exceptions, the episode shies away from discussing the prospect of Hawkeye being blind forever. Tom Straw brings up the fact that Hawkeye may not be able to continue doctoring and later B.J. suggests Hawkeye is acting manic in an attempt to keep his mind off what might happen when the bandages come off. But there’s no discussion of Hawkeye being sent home or having to be replaced at the 4077th. It’s as if the entire camp is holding its breath, crossing its fingers, and otherwise ignoring the very real possibility that Hawkeye may never see again.

On the one hand, that seems a little unrealistic. Obviously, if Colonel Potter did worry about having to find a new doctor, he wouldn’t mention it to Hawkeye. Likewise, B.J. wouldn’t voice his fears about his friend being sent stateside, at least not to Hawkeye. However, I would think Hawkeye would be very upset about his situation–depressed, even–but he doesn’t seem bothered by it at all. Perhaps that’s because he knows he’ll recover. Or maybe it’s because not being able to see has somehow opened his eyes to the world in a new and exciting way, as he explains to B.J. in a wonderful speech:

“One part of the world has closed down for me but another part has opened up. Sure, I keep picturing myself on a corner with a tin cup selling thermometers but I’m going through something here I didn’t expect. This morning I spent two incredible hours listening to that rainstorm. And I didn’t just hear it, I was a part of it. I’ll bet you have no idea that rain hitting the ground makes the same sound as steaks when they’re barbecuing. Or that thunder seems to echo forever. And you wouldn’t believe what– how funny it is to hear somebody slip and fall in the mud. I bet– it had to be Burns. Beej, this is full of trapdoors but I think there may almost be some kind of advantage in this. I’ve never spent a more conscious day in my life.

It’s a famous cliche, the idea that losing one sense heightens the others. Hawkeye doesn’t come right out and say he can hear better because he’s blind but not being able to see has made it possible for him to experience a rainstorm rather than simply observe it.

Frank’s B story is silly but grounded in the absurdity of the character. I think it works well because it ties into Hawkeye’s A story. The scene in which Hawkeye, B.J., Radar, and Klinger fake the baseball broadcast is a great one, although I’m not sure how they were transmitting to Frank’s radio. 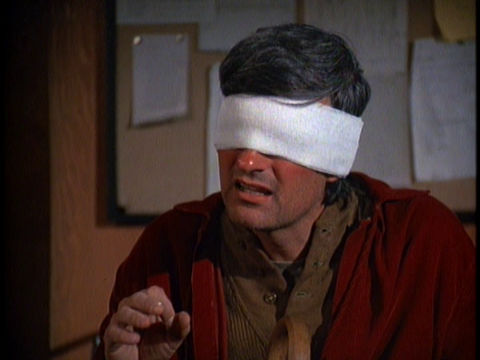 “Out of Sight, Out of Mind” was the first episode of M*A*S*H written by scripting partners Ken Levine and David Isaacs. Levine has discussed the episode several times at his blog. In a a July 2007 post he explained how the two got the assignment and how they brought 50 ideas with them when they met with Gene Reynolds to pitch stories. Two of them were later combined into this episode: Hawkeye losing his sight and Frank betting on baseball games heard over the radio (based on a story Levine heard).

In an October 2007 post Levine recounts purchasing an expensive VCR to record the episode when it first aired. And in an April 2012 post he delves a little deeper into how the script was written. Levine and Isaacs consulted with a woman who worked with the blind and she blindfolded them and told them to try to walk up a busy street.

Levine also pointed out in January 2010 that during the tag scene Lt. Gage can be seen reading JAWS–an anachronism, of course. And he revealed in January 2011 that Tom Shaw was named after a friend from high school who went on to become a scriptwriter as well.

“Out of Sight, Out of Mind” marked the first appearances by Enid Kent as Nurse Bigelow and Judy Farrell (who at the time was married to Mike Farrell) as Nurse Able. Both remained with series through the final episode, with Kent appearing in at least 14 episodes and Farrell in at least eight.

Bobbie Mitchell, on the other hand, made her final appearance on M*A*S*H in this episode. Her first appearance was in “The Army-Navy Game” during Season 1. She was in at least 18 episodes, credited as numerous different characters including Nurse Marshall, Nurse Lyons, Lt. Baker, and Lt. Gage.

Tom Sullivan, who played Tom Straw, is blind in a real life. His 1976 autobiography If You Could See What I Hear was turned into a movie in 1982 starring Marc Singer.

12 Replies to “Episode Spotlight: Out of Sight, Out of Mind”