Ah, the infamous gorilla suit episode. Very little actually happens during “As You Were” but it’s an episode with a lot going on. There are a few vague storylines woven through the episode: Frank’s hernia and Radar trying to convince someone to stop shelling so close to the 4077th. Otherwise, it’s just a collection of vignettes followed by a long stretch of surgery.

A lack of casualties makes life dull for the 4077th. Radar uses his free time to play the piano. Henry works on his tan. Father Mulcahy plays baseball and later washes his feet. Klinger writes a letter to General Mitchell threatening to send a picture to the general’s wife.

Frank lining up condiments in the Mess Tent is based on an actual experience Larry Gelbart’s had during his military service. From an April 2000 post to to alt.tv.mash newsgroup:

Incidentally, the piece of business was inspired by my own experience with an officious non-com during my own days in the Army, who was batty about the symmetry of the condiments on his tables in his mess hall.

Gelbart couldn’t remember who was holding the piece of string. It wasn’t him or Gene Reynolds. He thought maybe it was Roy Goldman or Jeff Maxwell.

Hawkeye and Trapper also pull an elaborate practical joke on Frank: they somehow get him into a wooden crate while he’s asleep. I love the way they look at the finger sticking out one of the air holes. This brief exchange between Frank and Trapper is perfect:

Henry’s lecture on the perils of venereal disease isn’t quite as good as his lecture on marital sex and the family from “Dear Dad” and it probably runs a little too long. He warns the men to stay away from “b-girls” while out at bars. According to the Internet, b-girls are either prostitutes or women paid by bars to attract men and encourage them to spend money.

How were Hawkeye and Trapper able to afford to buy gorilla suits and have them shipped to the 4077th? Actually, considering that they were never seen again after this episode, perhaps the suits were borrowed or rented rather than purchased. If anyone doubts that Alan Alda and Wayne Rogers were actually wearing the gorilla costumes, they were. Larry Gelbart confirmed this in a July 2005 post to the alt.tv.mash newsgroup. It was, he explained, “Too hard to find stunt gorillas.”

Radar impersonating a major and then a general is mildly amusing. But the sequence is redeemed at the end when he yells at his friend Tony to “Move your azimuths!” 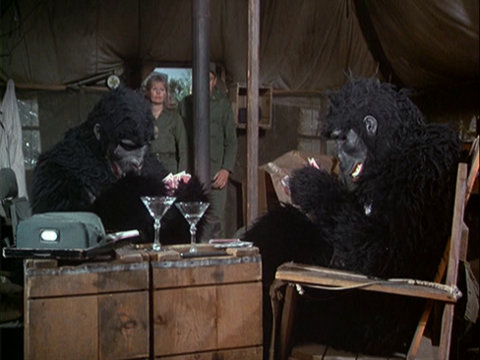 Gorillas in the Swamp

Yes, that really is Gary Burghoff playing the piano in the Officers’ Club at the start of the episode. According to the Twentieth-Century Fox cue sheet for “As You Were,” the piece of music is called “Radar’s Rag.” It was composed by Burghoff and published by the 20th Century Music Corporation. It’s heard again briefly at the very end of the tag.

Sheila Lauritsen makes an uncredited appearance in this episode. She’s the nurse who Henry asks to start another unit of whole blood. You can see her clearly when Frank strangulates his hernia.

Who is the mysterious George who takes over for Hawkeye in surgery? Another doctor?

The PA announcement about Alfried Krupp’s release from prison means this episode takes place in January 1951.

The very first scene of the episode–a shot of the 4077th depicting a man playing golf, football being played, and a group practicing dancing on a stage–is shown again at the start of the tag. I wonder if this was a mistake or done intentionally to suggest how easily the 4077th slips back into its routine when there are no causalities expected. That would fit with the title of the episode; “As You Were” being a military command telling soldiers to go back to doing whatever they were doing. Or maybe I’m thinking about it too much.

7 Replies to “Episode Spotlight: As You Were”