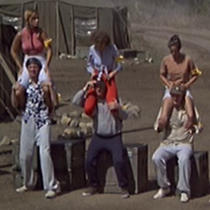 Capsule Summary: Annoyed with the poor fitness of the 4077th, Colonel Potter sets up the first annual M*A*S*H Olympics.

I had this episode confused with “Run for the Money” while rewatching it which actually turned out to be a good thing because I didn’t remember exactly how it ended.

I didn’t really like all of the newsreel footage. I’m not sure it was necessary and although the juxtaposition between the black and white footage and the 4077th’s Olympic games was amusing, it also pulled me out of the episode. The PA announcement at the beginning and talk in the O.R. was probably enough to set the Olympic tone. I wonder if the episode ran short and the newsreel footage was added to pad it out. That’s what happened with the Season 4 episode “Deluge.”

Would Colonel Potter really get so bent out of shape just because a group of doctors, corpsmen, and a nurse couldn’t tip over an ambulance after two half-hearted attempts? And what happened to the regular morning calisthenics seen in earlier episodes? Maybe once Frank left there was nobody left eager to exercise.

Beeson Carroll originated the role of Donald Penobscott in “Margaret’s Marriage” but former Tarzan actor Mike Henry took over in this episode. Unfortunately, Donald is portrayed as a bit of a doofus here, perhaps to better counterbalance Margaret’s crazed enthusiasm for the three extra days of R&R. Donald losing the tie-breaking obstacle course was expected but still really stupid.

The minor B Story in which Klinger attempted to eat his way out of the army (“I call it food for freedom!”) worked well because it fit perfectly with the A Story. Most of his stunts and schemes stood no chance of working but this one could have worked if only Klinger had slowly and methodically gained weight rather than trying to pack on the pounds overnight. 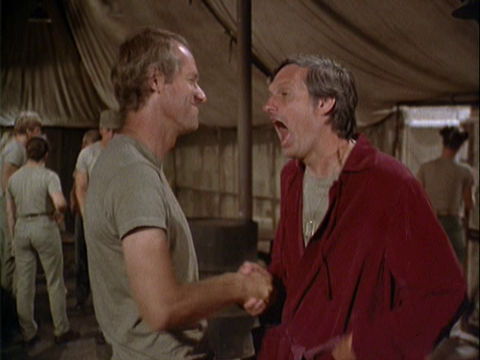 When Margaret drives off in the jeep with Donald, Hawkeye can be seen for just an instant pushing B.J. in the wheelchair. The episode the cuts to a scene in the O.R. Then the tag starts with a glimpse of Margaret and Donald driving away before focusing on Hawkeye and B.J. It’s a rough edit and suggests to me that the O.R. scene was originally intended as the tag but for some reason the wheelchair scene was substituted instead.

This episode takes place at some point between July 19 and August 3rd, 1952. That’s when the Summer Olympics in Helsinki were held.

Is this the only time we see dirty trays stacked on a cart in the Mess Tent?

Nurse Kellye can be seen at the front of the crowd during calisthenics and is on B.J.’s team for the Olympics but I don’t see any of the other regular background nurses in the episode. Or Igor, for that matter. Goldman is in the Mess Tent when Potter announces the games. Maybe they were hiding.

The nurse carry is reminiscent of the gurney race seen in “The Trial of Henry Blake” during Season 3, only not quite as much fun. I doubt it was an easy scene to film and I wonder if some of the spills and falls were accidental rather than scripted.

Klinger’s reaction to the lighting of the “Olympic” torch is odd. The flames weren’t out of control and he wasn’t in any danger.