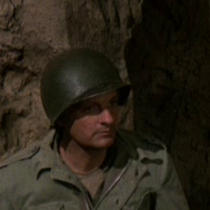 Capsule Summary: The 4077th is forced to evacuate to a nearby cave due to heavy shelling and Hawkeye’s crippling claustrophobia is revealed.

It’s nice every now and then to be reminded that the “M” in M*A*S*H stands for “Mobile” and that the 4077th was often forced to pack up and move due to shifting front lines and artillery fire. The novelty here is that bugging out to a new location wasn’t possible due to shelling from both sides so the 4077th had to go spelunking. Too bad so little of the episode actually takes place in the cave.

I think most fans, when asked about this episode, immediately point out that Hawkeye’s claustrophobia is a blatant plot contrivance. And it is. This was the first and only mention of his fear of enclosed spaces, something you’d would have come up at some point. He had no problem with small or enclosed spaces in earlier episodes–for example he hid in a trunk in “M*A*S*H–The Pilot” and squeezed into a jeep in “Dear Peggy.”

To be honest, I’m not sure the episode needed Hawkeye to be claustrophobic. Aside from a few chuckles, it didn’t actually add much to the story. In fact, it may have been more interesting if Hawkeye had to overcome his fear of leaving the relative safety of the cave to go back to the 4077th to operate on Private Lovett. What if the doctors had to draw straws to decide who operated on Lovett? Or would that be too similar to the scene in “Aid Station” when everyone drew sausages?

Margaret’s fear of loud noises doesn’t feel quite as out of place, in part because it can be traced back to earlier episodes, particularly “Comrades in Arms, Part 1” in Season 6.

Sergeant Bartruff was too much. It’s one thing to depict military incompetence. That’s par for the course with M*A*S*H. But Bartruff wasn’t incompetent. He was smarmy. He seemed happy to hear the 4077th might be in the wrong place and in danger. He didn’t appear concerned at all to learn the Army might be shelling a hospital. 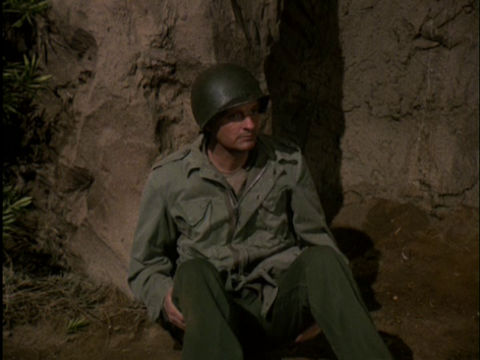 Hawkeye sits outside the cave.

Radar is not in this episode.

I sort of feel like something more should have happened with O’Malley, the wounded soldier who could identify artillery by its sound and thought up the crutch device. I wonder if there was another scene with him written or filmed and then cut.

The cave looked pretty realistic even though I am 99% sure it was made out of 2x4s and papier-mache.